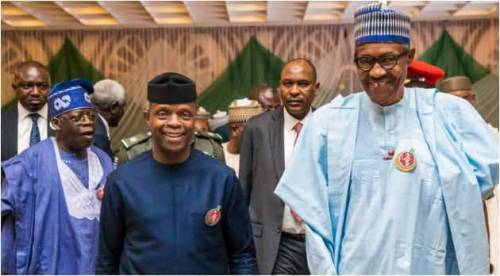 President Muhammadu Buhari will in May reveal his choice among those aiming to be his successor on the platform of the All Progressives Congress, Njenje Media News reports.

According to a presidential source, the President is critically studying the aspirants, their attitudes, actions, backgrounds, and others before either making his pronouncement on the issue or directing his trusted aides on whom to queue behind them.

Some of the aspirants, who have made their intentions known to run for the presidency are Vice-President Yemi Osinbajo; Minister of Transportation, Mr. Rotimi Amaechi; Minister of Labour and Employment, Senator Chris Ngige; a former governor of Lagos State, Asiwaju Bola Tinubu; Kogi State Governor, Yahaya Bello; his Ebonyi State counterpart, David Umahi; a former governor of Abia State, Senator Orji Kalu; and an ex-governor of Imo State, Rochas Okorocha.
They have openly declared their interest to succeed the President, whose second term ends on May 29, 2023.

Others rumored to have presidential ambition in the party but have yet to declare their intentions include the Governor of Ekiti State, Dr. Kayode Fayemi; and the Governor of the Central Bank of Nigeria, Godwin Emefiele.

Buhari had expressed fear that his favorite presidential candidate might be “eliminated” if he revealed the person’s identity.

He said this during an exclusive interview with Channels Television in January, while noting that he had no special interest in the 2023 presidential election.
“It is not my problem,” he replied when asked about the next presidential election.
He stated, “I am not interested. I believe that whoever wins the poll should be sworn in as the next leader of Nigeria.
“All important things have been documented. No one should ask me to appear before the court to give evidence on any issue (public funds). All important things are already on record. I am sure about that.”
When asked about his preferred successor, the President replied, “I won’t tell you my favorite for 2023; he may be eliminated if I mention him. I better keep it a secret.”

RELATED POSTS:  PDP crisis: I can stop Ortom, others from realizing their ambition – Iyorchia Ayu