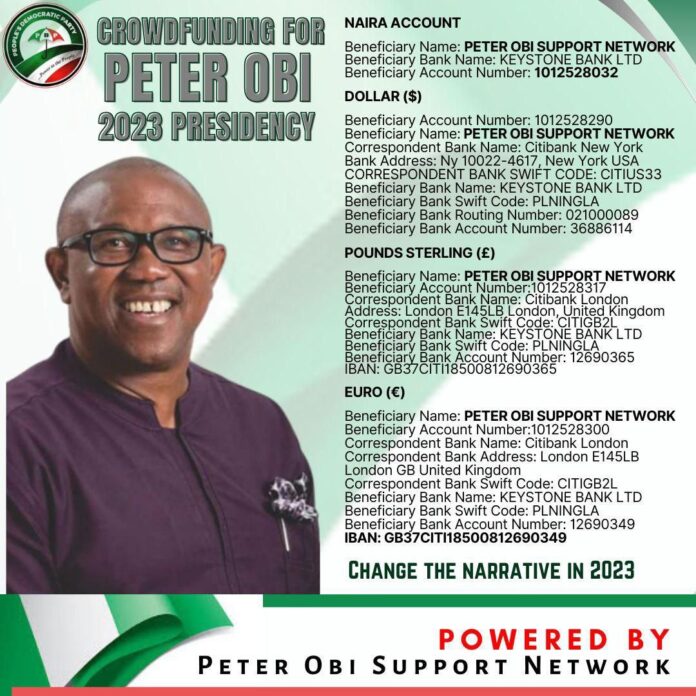 Peter Obi Support Network (NSN) has begun the mobilization of funds to support the aspiration of the former governor of Anambra state who declared his presidential aspiration last week, Njenje Media News reports.

it would be recalled that Mr. Peter Obi, former governor of Anambra state and 2019 vice presidential candidate of the opposition Peoples Democratic Party, had last week, declared his intention to contest for Nigeria’s top job.

Peter Obi Support Network, in a statement signed by its Director of Strategy & Mobilisation, Marcel Ngogbehei, said Nigeria needs somebody like Peter Obi at this time of economic crisis where millions of unemployed youths are roaming the streets of this country.

The group added that the track record of former Governor Peter Obi, both in public and private sector, is there for anybody to see. The group said it was pertinent for Nigerians to embrace Peter Obi as the next President of the Federal Republic of Nigeria because he has a clear road map to get Nigeria out of the woods.

They also appealed to the electoral college of the PDP not to sell their party ticket to the highest bidder. It rather encouraged the party to nominate a presidential candidate who has a visible track record of performance and who can quickly turn around the fortunes of the country.

RELATED POSTS:  Those Responsible For Running The Nation Are On Holiday – Sowunmi

The group invited Nigerians who are desirous of a better-governed country to donate and support Peter Obi’s presidential bid.

The statement reads, “We Peter Obi National Support Network (NSN) has resolved to mobilize funds for the former governnor of Anambra state to assist in the realisation of his presidential ambition.

“We do this with all mindfulness of where we are as a country and where we could be headed if concerted efforts are not made to bring in purposeful leaders. The performance of Mr. Peter Obi both in private and public sector is enough to speak for him.

“As part of our agenda to reverse Nigeria’s dangerous drift, we are ready to knock on doors, and speak one-on-one with our brothers and sisters to support Peter Obi to emerge as Nigeria’s next president.

“As members of Peter Obi Support Network, we are committed to spreading the good news of his presidential ambition to the length and breadth of this country.

“Part of our efforts to ensure that we realize this vision is the reason we opened a Naira account with Keystone bank with number: 1012528032 for anybody who believes in Peter Obi project to contribute.

“On our part, we pledge to make judicious use of every kobo contributed to serve this purpose. As people of integrity, and in keeping with the accountability for which Peter Obi has been known for, we will give proper account of all received donations.

“We appeal to the electoral college of the Peoples Democratic Party (PDP) not to give its ticket to the highest bidder, but to someone who has what it takes to get Nigeria out of the woods.”