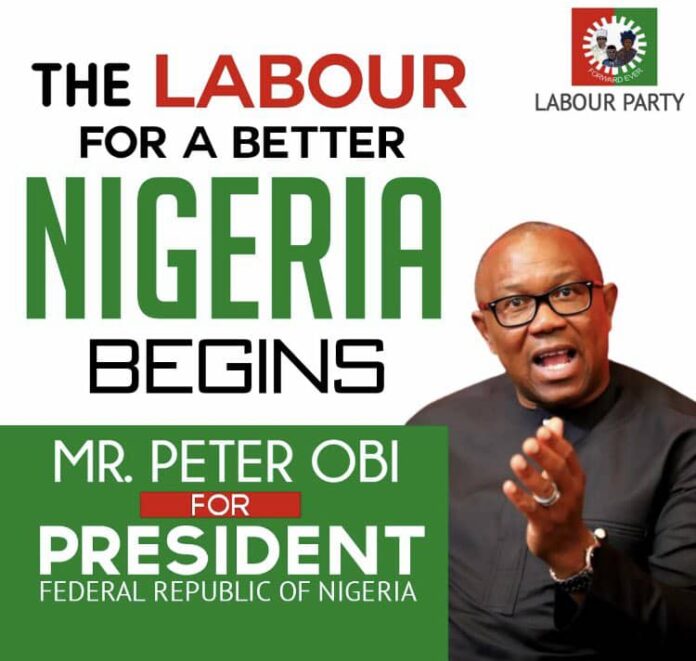 While congratulating His Excellency Mr. Peter Obi, for picking the Labour Party Presidential ticket, one would seize the same opportunity to share some insights on how the man could win the 2023 Presidential election. It will be a very tough contest and Peter Obi is coming into the fray as an underdog who has all the trappings of a dark horse.

By the way, a dark horse is a contestant that on paper should be unlikely to succeed but yet still might, and Peter Obi is just typical. The way the nation’s politics is structured, it is a grand elite game and concentric circles of conspiracy.

But the big question: is Peter Obi real or a fluke? The only way to prove that Peter Obi and his millions of supporters are real and mean business is by them going the whole hug and possibly winning the 2023, which will be difficult but not impossible. The conditions to make it happen are fairly in place. It is just about seizing the moment and making the beckoning history.

Here are a few tips of what Peter Obi supporters need to do: the first step is registering and collecting the PVC. Unless over 70% of his supporters possess their PVCs and vote, their support will ultimately prove ineffectual and an empty noise.

Knocking on every door in Nigeria with localized and customized messages, possessing the PVC and voting are just the first steps. The next steps are even more crucial. Rigging is a permanent feature of Nigeria’s election and the APC and the PDP are masters of the game. Many of their leaders are its byproducts but there is something about the new Electoral Act that offers a leeway to checkmate them and that is electronic transfer of results (where possible).

The master riggers will try to force INEC officials to rely more on manual collations of results. Once Obi’s supporters allow this, figures will be manufactured. But if his supporters understand the game, they will start now to mobilize themselves to develop their databases in over 8,812 wards and over 120,001 polling units in the country. Knowing themselves based on wards and polling units will be an anchorage. That way, they will be there for one another, and there for Peter Obi, and vote and ensure that their votes are counted and more important, the exact figures transmitted.

RELATED POSTS:  Igbo Presidency: Why Igbo Leaders Should Choose A Consensus Candidate In PDP – Doyin Okupe Reveals Why They Cannot Reap Where They Did Not Sow

With the aid of smart phones they can snap the copies made available at the polling units and send them to Obi’s coordinators.

It is also important to note that what happens on election days that affect the fortunes of candidates seriously is the buying off of party representatives. It is expected that most party representatives for the Labour Party in 2023 will be Obi’s supporters. But if they receive a few thousands of naira to throw Peter Obi’s presidential aspiration under the bus, the journey may well end there. But they can resist it.

They also have to keep raising money to fund their own operations on Election Day. Obi may not be able to reach the over 8,812 wards and over 120,001 polling units. Not that enough money will not be provided; but Party officials will keep pilfering the money to the extent that what will get to the wards and polling units for the actual work, especially on election day, may be less than trickles.

Yes, Obi can be elected but it is not in his hands alone. His supporters have more to do if their man will carry the day in the likely hostile election, an election that means a battle of supremacy between the political elites and Nigerian masses with Peter Obi as arrowhead.

Luckily, the man has the requisite cognate experience, having served as a two-term governor of Anambra state, presidential adviser and chairman of a major federal parastatal. Obi therefore is not a neophyte and understands this game fairly well. The man is set to become a disruption, reminiscent of the coming of Emmanuel Macron of France to power.

He has run a presidential campaign. In 2019, he was vice presidential candidate of the Peoples Democratic Party (PDP), the party he just dumped to take up a less fancied platform for obvious reasons. PDP’s ticket predictably and, as always, went up to the highest bidders and better conspirators. Peter Obi saw it clearly and had two options. To bid like the rest and bid to outbid them all or bail to save his honour and keep fidelity with his principles for which the masses love and now cluster around him.

Many believe that Peter Obi does not have that kind of money to purchase delegates. Yet, arguably, Peter Obi is richer than these men, whose sources of funds are all traceable to the government, being either present or past government officials. Yes, Peter Obi was governor but was already a billionaire before then and refused to take any allowances or payments while serving as Adviser to the President of Nigeria and chairman of a Federal Parastatal.

This means that while his rivals were ready to throw around money acquired while in government positions, Peter Obi would have to throw in his hard earned money to purchase delegates.

Some have argued that since that is the nature of Nigeria’s politics, Obi needed to play along and become presidential flag bearer or, at least, a vice. But walking away from such an Augean stable was what a man of principle ought to do and that was exactly what Peter Obi did. If he had descended into the arena of the PDP obscenely monetized primary (to borrow the words of Hayatu-Deen, one of the PDP aspirants who withdrew from the race hours to the show of shame), would have tarred Peter Obi with the same corruption brush.

Obi proved that he is indeed the ‘poster boy’ of the kind of change Nigeria needs at the moment – Nigeria desperately needs to move into a paradigm that would switch the nation from consumption and production, and return power to the Nigerian people. At the moment, what is going on is nothing but a grand elite conspiracy and coronation of corruption. The Nigerian masses have been deceived and kept divided with religion and other primordial sentiments and it is time to say no.

The divide-and-rule politics has left the country merely a geographical expression with the masses incapacitated and unable to build a nation. Like former President Olusegun Obasanjo recently observed, Nigeria is still a country, and not yet a nation. Peter Obi could be that bridge with which Nigerians can cross into nationhood, and build a nation that will work for all, regardless of creed and tongue.

This essential aspect of Peter Obi makes him symbolic of a new beginning, which is why the Nigerian masses mill around him and never seeing him as an Igbo, Christian, or through any such tainted prism, but simply as a sincere astute and concerned Nigerian they can trust to bring succor and change (not chain as we now have) that will restore the nation.

This is quite uncommon and that is the making of a political movement. Yes, Peter Obi is now a movement and the much talked about 3rd Force. This is self-evidently seen in his twitter handle surging past 1m followers 2 days after he courageously left the PDP and the portal of the Labour Party where he ported crashing severally for exceeding its bandwidth as Nigerian masses struggle to register in the Party just to be with Peter Obi.

Before Obi and PDP parted ways for good, there were scores of groups sprouting all around the country as Peter Obi Support Groups. They were so many and unique in many respects. When detractors derided them as internet warriors who live in the labyrinths of the social media and faceless, the supporters organized a one-million-man march for Peter Obi, raising their own funds to organize rallies across the lengths and breaths of Nigeria. While many support groups of other aspirants are going to their principals to collect money to run their shows for political optics, supporters of Peter Obi have launched several crowd-funding platforms to raise money for Peter Obi. By doing so, they have become critical stakeholders of the President Peter Obi Project.