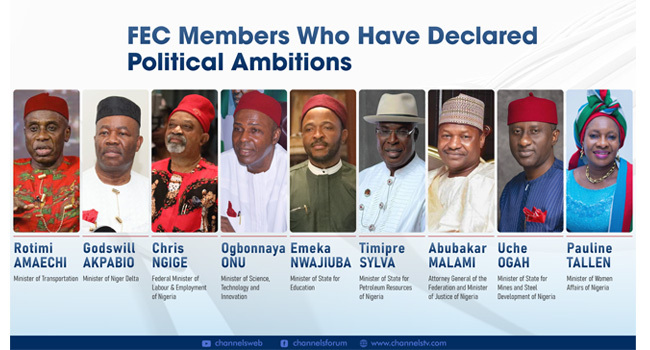 The Presidency on Thursday has said government appointees who do not resign to pursue their political ambition “would have someone decide for them”, Njenje Media News reports.

Presidential spokesman Garba Shehu said this hours after President Muhammadu Buhari directed members of his cabinet and other government appointees nursing political ambitions ahead of the next election to resign.

“We are dealing with a government policy, a government directive, a circular of the government issued by the Secretary to the Government of the Federation duly approved by the President [which] clearly states who is to go,” he said in an interview on Channels Television’s Sunrise Daily.

“So, I think that in a few occupied offices like that, you make the decision by yourself otherwise, someone would decide for you. So, that’s the point.”

According to him, the instruction to resign is clear, stressing that they were appointed.

Nine ministers, who are contesting for various positions at national and state levels, are affected by the new directive. Already, some of them have resigned to pursue their political ambitions.

The spokesman’s comment came on the heels of criticisms over the cost of nomination and expression of interest forms for the All Progressives Congress (APC) presidential ticket.

While he believes aspirants can source money by various means such as donations from their supporters, the presidential aide said it is not the place of the presidency to investigate the sources of funding.

He also suggested that the APC should not refund monies used in the purchase of the forms even if an aspirant makes a U-turn in their pursuit.