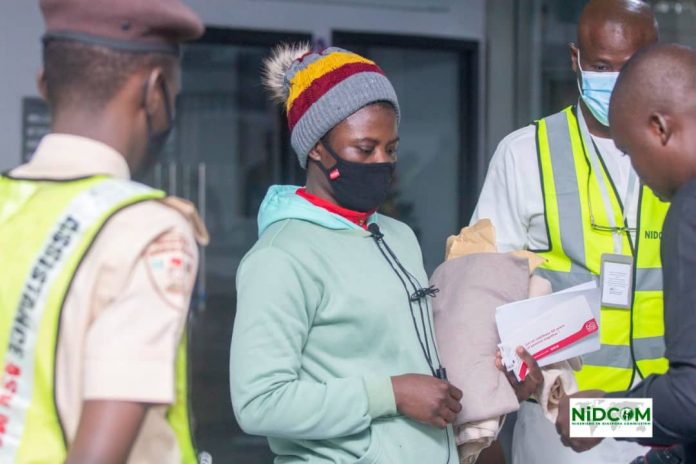 The Nigerians in Diaspora Commission has made possible the return of a 35-year-old mother of four, Omowunmi Rhoda Aladeboyeje, who was reportedly trafficked to Cairo, Egypt by her elder brother who had intimated her about a nursing job in the United States.

”She was trafficked on March 17, 2020 and claimed to be sexually harassed on a regular basis, beaten frequently and home imprisoned sometimes. Rhoda, a mother of four, was trafficked by her immediate elder brother who claimed there was a nursing job opportunity in America.

However, going to America turned out to be a ruse. She was trafficked to Egypt and went through so much torture and hell. When a distress call from her family member was received by NIDCOM, the Nigerian mission in Cairo was contacted immediately to put all logistics in place to facilitate her return. With that done , and with Rhoda in the safe custody of the mission, her family made provisions for her ticket home.”

The NIDCOM scribe says Rhoda who is an auxiliary Nurse, is currently on her way to her home town Okitipupa in Ondo state.