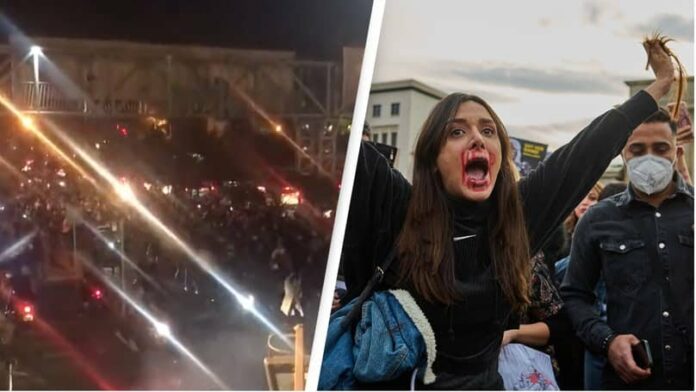 At least 50 people have been killed after the eighth day of anti-hijab protests in Iran, according to new reports.

Across the country, women have taken to the streets to protest the death of Mahsa Amini.

The 22-year-old was arrested for allegedly violating the country’s strictly enforced dress code.

It has been obligatory for women to cover their heads since the Islamic Revolution in 1979, and morality police said she wore her headscarf – or hijab – too loosely.

Amini collapsed and spent three days in a coma after being detained by police in Tehran.
Iranian police say Amini died of a heart attack, though her family believe she was severely mistreated.

Independent experts linked to the United Nations (UN) say reports suggested she was badly beaten after being detained.

Since then, thousands of women have been taking to the streets, cutting their hair off and burning their head scarves in protest over Amini’s treatment.

In other footage, gunfire can be heard as demonstrators run away from riot police while shouting: “They are shooting at people! Oh my God they’re killing people!”

And though official figures claim 26 people have died during the riots, a report from Oslo-based group Iran Human Rights says the number is at least 50.

The scenes of women cutting their hair and burning their hijabs are part of a broader political debate over the imposition of of religious dogma in modern-day society.

The protests have also grown into an open challenge to the government, with the chants calling for the downfall of the ruling clerics.

Some have been heard shouting, “Death to the dictator!” and “Mullahs must be gone!”

In a video declaring the group’s support for the cause, a distorted voice says: “This was the last straw… The Iranian people are not alone.”

The two main websites of the Iranian government, as well as state-affiliated media websites, were reported as going down last week.