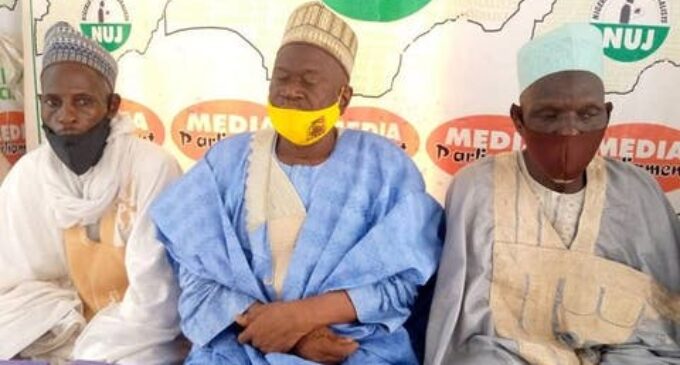 The Seriki Fulani of Igangan, Alhaji Saliu Abdulkadir, has accused Sunday Igboho of leading the attack which resulted in the destruction of properties in the area, Njenje Media News reports.

At a media conference in Ilorin, the Kwara State capital, on Thursday, Abdulkadir said that seven of his people were killed as a result of the attacks, while two corpses have not yet been found.

“I was at home when the area commander of Oyo state called me that they are coming to my house with Sunday Igboho for dialogue,” he said.

“It was not up to 40 minutes when my children ran to me that some group of people led by Sunday Igboho, were coming towards us, where we observe our Eid prayers, trooping to my house, burning our houses, shooting guns, burning our cars, and killing our animals. My children had to rescue me from the village.

“My houses, 11 vehicles belonging to myself and my children, and some others belonging to visitors were burnt to ashes. Seven of my people were killed. The corpses of two of them have not yet been found. Some of my animals were carted away. I urge the government to take note of all these.”

He also alleged that Yorubas are involved in criminal activities which have led to the abduction and killing of several of his kinsmen.

“When the case of kidnapping was reported to me, I assisted the security agents to arrest nine suspects. Among these nine, about six of them are Yorubas, while the other three are Fulanis. Three Yorubas among them were released, while the remaining six are at the correctional centre in Agodi, including the Fulanis,” Abdulkadir added.

“Furthermore, there are two villages close to Igangan, namely, Tapa and Lanlate. I worked with the security agencies to arrest some kidnappers in these two villages towards the end of last year.”

He called on the government to investigate the attack on his residence in Igangan, and ensure that all those found culpable are brought to book.

Njenje Media News recalls that Sunday Adeyemo, more known as Sunday Igboho had issued a quit notice to Fulanis in Ibarapa local government area (LGA), and at the expiration of the notice, together with his boys, evicted Fulani herders in the community.

This generated mixed reactions as some hailed him for his move to stem the incessant killings in the area while some criticized him for ejecting legal residents.