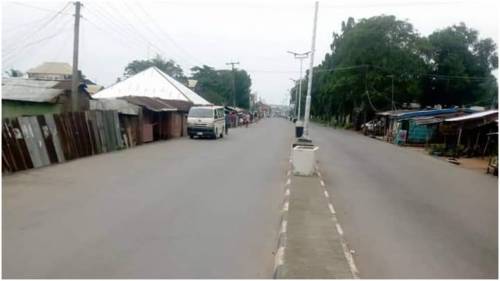 The streets were literally empty as many refrained from commercial activities for the day.

Indigenous People of Biafra had directed a sit-at-home urging members and residents of the South-East region to boycott commercial activities on Tuesday in remembrance of their fallen heroes who died four years ago.

According to the group, the sit-at-home is sacrosanct and to be observed as a peaceful protest for the remembrance of the victims of the military invasion of their leader, Nnamdi Kanu’s compound at Afaraukwu Ibeku in Umuahia on September 14, 2017.

About 28 people were reportedly killed during the raid by the Nigerian Army.

The military, however, denied any involvement in the raid which drew international condemnation.

Some of the major streets at the state capital, monitored by Vanguard, were virtually deserted except for occasional human and vehicular movements.

It was also observed that some of the streets were converted to temporary football pitches by youths.

Business activities have been completely grounded as shops on the street were under lock and key and banks also had yet to resume daily activities.

The ever-busy Isi Gate relief market was also a ghost of itself although some dealers on perishables and foodstuffs were sighted attending to few desperate customers.

A resident was quoted as saying, “the sit-at-home thing is becoming confusing”, and appealed to IPOB to consider the economic and other implications on the people.

The resident, a furniture maker who pleaded anonymity said, “Yesterday, we sat at home, and today, I called a friend who told me he had gone to look for what to eat, that’s why I decided to also come out.”

There was no incidence of any clash with security agencies so far as at the time of filing this report.

COAS Death: Nigerian Flag To Fly At Half Mast In Honour...