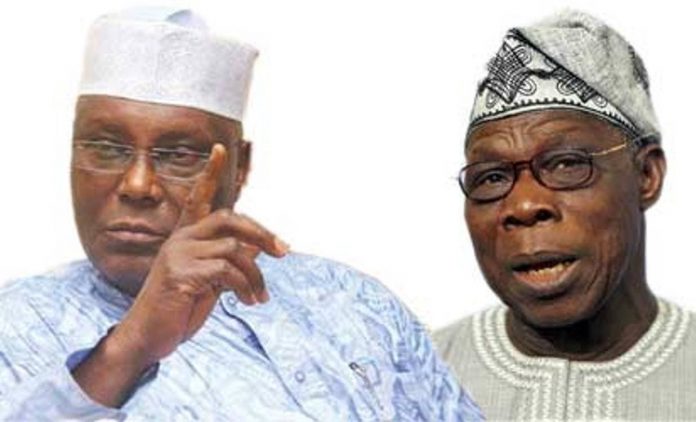 The ruling All Progressives Congress (APC) has attacked former President Olusegun Obasanjo and his erstwhile deputy, Atiku Abubakar for their recent interventions in the polity, saying they ought to keep quiet having midwifed the current national rot.

The party in a statement by its Deputy National Publicity Secretary, Mr Yekini Nabena specifically asked Chief Obasanjo to account for $16 billion spent on the power sector during his time in office. It equally asked Atiku to account for the privatisation of national assets which it alleged were sold off to cronies.

While Obasanjo recently weighed in on the security situation in the country, berating the President Muhammadu Buhari led APC administration for not doing enough, Atiku on his part had condemned the recent hike in the pump price of Petroleum Motor Spirit PMS also known as petrol.

“It is baffling that the same political actors that midwifed and institutionalised the national rot, corruption, impunity and eroding of our value systems are the same characters posing as voices on the way forward in our national life. How ironic!

“Former President Olusegun Obasanjo could start with telling us where the electricity is despite $16billion he spent on the power sector.

“Obasanjo’s deputy, Alh. Atiku Abubakar should account for the privatisation exercise under his watch which saw national assets sold off to friends and cronies with no benefit to the country. Successive Peoples Democratic Party (PDP) administrations can also start by accounting for the trillions stolen from our national coffers in the guise of a fraudulent fuel subsidy regime”, APC stated.

The ruling party noted that “while it is well within the rights of these political actors to write skewed letters, spew empty, hypocritical, tongue-in-cheek and two-faced economic magic models in line with their Dubai meeting strategies, this administration is walking the talk with verifiable projects and people-centred interventions that is uplifting Nigerians”.

“These political actors probably only listen to their own voices because Nigerians have long stopped taking them seriously as they simply lack the antecedents and moral credentials to guide Nigeria and Nigerians to the path of prosperity and progress.

“Instead of the ‘do or die’ lingo Obasanjo and the PDP introduced to our electioneering, votes are beginning to count as our elections improves steadily.

“Their abandoned projects which constituted drainpipes on national resources are being completed by this administration.

“The brazen culture of impunity and corruption which they institutionalised is being replaced by strong and accountable systems.

“The culture of roundtripping and the rested subsidy regime in the petroleum sector has been replaced by a deregulated and accountable petroleum pricing template.

“Instead of plotting how to sell off national assets, particularly the NNPC to friends, this administration is reforming public sector operations to ensure optimised service delivery.

“We are gradually eating what we grow. Our national emergency health response has earned global accolades and recognition as displayed by our COVID-19 response. Our defence capacity to respond and contain emerging security challenges is now tested and proven. How did Nigeria achieve this? A strong, people-centred and focussed leadership which the President Muhammadu Buhari-led APC administration provides.

“Genuine patriots, reputable groups and organizations who are making honest contributions on the deregulation of electricity and petrol prices already see the decision as inevitable and the way to go.

‘As it stands, Nigeria will save as much as one trillion naira ($2.6 billion) following the deregulation of the petroleum sector, the Petroleum Minister of State Timipre Sylva has stated.

“Nigerians trust that the freed-up cash will be accounted for and be judiciously invested to develop other critical areas such as infrastructure, health care, education among others”, APC added.