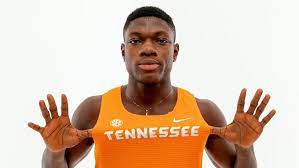 Two-time Nigeria 400m hurdles champion, Abasiono Akpan will be joining Favour Ashe as the second Nigerian athlete on the roster of Auburn University when the 2023 collegiate athletics season begins.

The 22 year old is one of the 22 new student-athletes Auburn University track & field head coach Leroy Burrell announced this month.

The 2019 African Games bronze medalist has been described as very competitive by Tobi Amusan’s coach, Lacena Golding-Clarke who is an assistant coach at the University in charge of sprints and hurdles.

“Abas is very competitive and confident and will give her final effort for her team,” said Golding-Clarke.

Abasiono will be hoping she can improve and probably become the second Nigerian woman after Ajoke Muizat Odumosu to compete and run in the final of the women’s 400m hurdles at both the Olympics and the World Athletics Championships.

The Ikot Ekpene born 400m barrier runner who won the event’s gold at the 21st National Sports Festival, Delta 2022 is now the second Nigerian student-athlete at Auburn University after Ashe.

Ashe, the 20 year old Nigerian transferred from University of Tennessee to team up with Burrel, a former World 100m record holder as the reigning Nigerian Championships 100m king will be seeking to not only improve on the 60m silver and 100m bronze he won in his first NCAA indoor and outdoor Championships respectively but also transform into a world class sprinter capable of challenging for medals at the World Athletics and the Olympics.

The post Akpan teams up with Ashe at Auburn University appeared first on The Sun Nigeria.