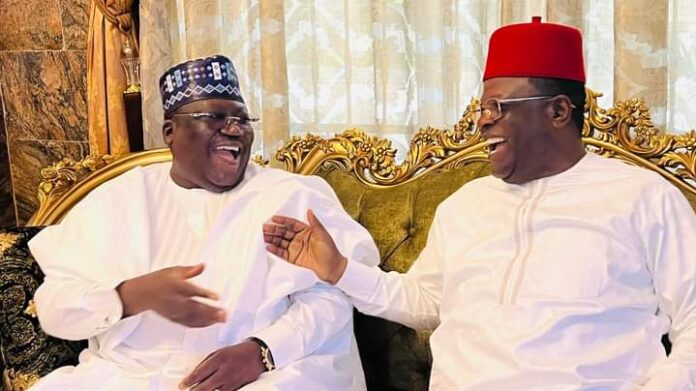 Our attention has been drawn to a news story purportedly broadcast on the stable of one of the revered Television Stations in Nigeria, the Arise Television in which the Station announced that Engineer David Nweze Umahi has stepped down his aspiration for his fellow Presidential Aspirant and Senate President, Ahmed Lawal ahead of the Presidential Primary.

Without much Ado, I make the following clarifications to guide the teeming supporters of Engineer Umahi, members and stakeholders of the All Progressives Congress, APC, and Nigerians at large.

1. The news item is totally false in context and content. This raises a question mark about the credibility of the source of such fallacy, what never took place which is capable of putting Engineer Umahi’s aspiration in jeopardy.

2. For the sake of discerning minds, what happened was that Senate President, Ahmed Lawal in a last-ditch effort to ramp up partnership ahead of the APC Presidential Primary, visited Governor Umahi in his Abuja residence on Saturday where they both promised to support whoever amongst the two and other Aspirants that emerge the Flagbearer of the Party in the Primary. The Senate President even took out time to eulogize Engineer Umahi for making the Party proud through his purposeful governance in Ebonyi State.

3. There was no time during the visit that the issue of stepping down by either Engineer Umahi or the Senate President was discussed or even suggested.

4. It, therefore, becomes a serious concern how the Arise Television got themselves enmeshed in this kind of professional miscarriage of reality without verifying the authenticity or otherwise of their news source.

5. The teeming supporters of Engineer Umahi across Nigeria and beyond are encouraged to disregard the ill-fated news item which is by all standards fake, and go about their solidarity on the assurance that His Excellency the Governor is still very much in the race to develop Nigeria, God willing, he will emerge in the Sunday Presidential Primary of our great Party, the All Progressives Congress.