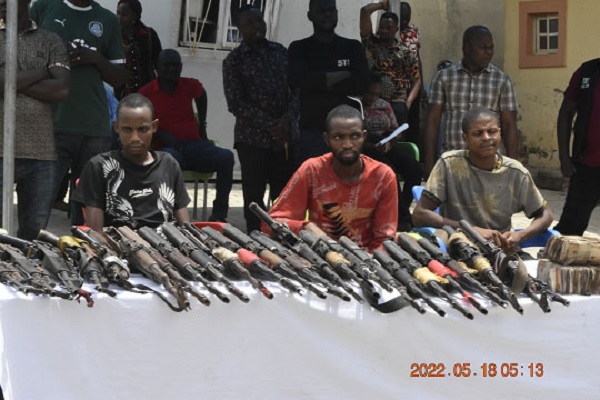 SIR: The first casualty of capricious election seasons in Nigeria is security. Governance is abandoned, and all efforts and expense are dissipated on party politics. Nigeria’s security insalubrity is deteriorating steeply as the 2023 elections close in. It is all reminiscent of the build-up to the 2015 elections when ubiquitous violence seized the country and the elections had to be postponed.

Will it be again as it was before? Will it be plus ca change?

Religious leaders – both Christians and Muslims – have become the latest spectacle of these gangs of death-dealers from the netherworld.

On July 3, Udo Peter and Philemon Oboh, both priests of the Catholic Church, were abducted by gunmen in Edo State. The gunmen reportedly kidnapped the priests on Benin-Auchi expressway. On July 4, the despoilers kidnapped Emmanuel Silas, a Catholic priest, in Kaduna State. Silas was reportedly kidnapped in Zambina, Kauru LGA of the state.

On June 25, the ravagers killed Vitus Borogo, the chaplain of the Catholic Church in Kaduna Polytechnic. Borogo was reportedly killed at the Prison Farm, Kujama, along Kaduna-Kachia road. Weeks before this incident, Joseph Bako, a Catholic priest who was abducted in March from his residence at St John Catholic Church, Kudenda, Kaduna, was found dead.

On June 29, Samuel Kanu, Methodist prelate, was kidnapped in Abia State. The clergyman gave a depressingly harrowing account of his ordeal on the turf of these enemies of humanity. A few other priests have been kidnapped and some killed.

The kidnapping of priests appears methodic and targeted. Perhaps the motive is to instigate and amplify religious tension. Already, there have been suggestions that these assaults fit into a grand sinister plot. But we must realise, at all times, that these criminals are the common enemy of all. They have killed and kidnapped Muslims, Christians, children, young and old.

We must remain united against the devilment of those who want to cleave us apart.

A few days ago, a divisional police officer (DPO) who was leading his men to rescue kidnap victims in Nasarawa was himself stolen by these dare-devil freebooters. His abductors demanded N5 million before he would be freed. On June 26, Ochogwu Sunday, a divisional police officer in Birnin-Gwari, Kaduna was kidnapped. Other officers have either been kidnapped or killed. On Wednesday, Aminu Umar, an assistant commissioner of police, was felled by the crimson bullets of bandits in Katsina.

And it persists. No let-up. No solution. No prognosis of hope. No respite. But utter confusion, hopelessness and helplessness. The land is violated and coursing with the blood of innocents.

The Federal Capital Territory (FCT) has become of the hippodrome of bandits – where they put up defying performances and saunter away. For years, these criminal gangs have operated in the FCT – but the administration has always dismissed the potency of this threat.

A few days ago, some residents of the Federal Capital Territory (FCT) were kidnapped on their farm. Kuje where the Islamic State in West Africa Province (ISWAP) recently did a blitzkrieg has been in the throes of terror. Some communities in the area have been sacked by kidnappers, and many residents have abandoned their houses to seek shelter elsewhere. Other parts of the FCT like Ushafa, Bwari and Kubwa have also been visited by the pestilence.

The blitz by ISWAP on the Abuja prison reveals the porosity of Nigeria’s seat of power. On Thursday, the US and the UK warned their citizens to be vigilant as crime would spike in the FCT. Kidnappings, armed robberies, drugs and all other iniquities have become the quotidian aspect of life in the nation’s capital. The FCT has never been this plagued.

What happened to the so-called game-changing Super Tucanos and other military hardware procured by the administration with a boast that the insurgents and bandits would be pulverised? So far, the government has spent N4 trillion on defence in seven years, yet there is no interlude of peace.

President Muhammadu Buhari must go beyond the expression of shock, airy statements, and at least mitigate this challenge before the elections. I believe he would not want to be remembered as Petronius Maximus who technically surrendered Rome to the Vandals.