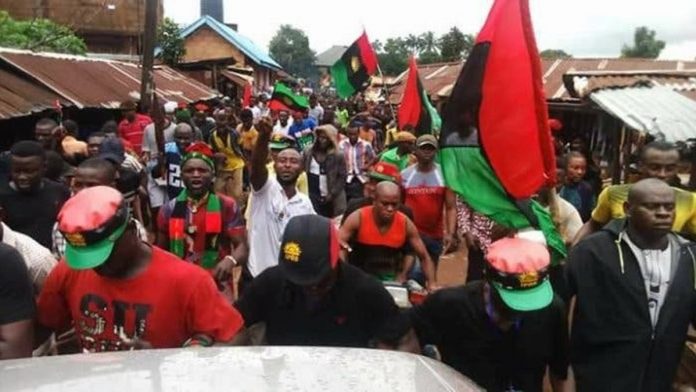 Alaigbo Development Foundation, ADF, on Wednesday petitioned international communities to wade into the gruesome murder of over 21 members of the Indigenous People of Biafra, IPOB.

The leadership of the group, in a statement signed by its President, Mr Abia Onyike, and forwarded to DAILY POST in Abakaliki, however, tasked President Mohammadu Buhari to immediately remove the ban on IPOB activities.

It reads in part: “ADF unequivocally condemns the brutal massacre of over 21 Igbo youths in this latest phase of the Igbo genocide, the longest, most continuous and unresolved genocide in the political history of the African continent. The first phase of the Igbo genocide was from 1966-1970 and was used to inaugurate Africa’s age of pestilence as the first post-colonial genocide in the continent.

“ADF believes that this brutal massacre of unarmed and defenceless citizens who were meeting in an open space to discuss their affairs is the height of political impunity and arbitrariness on the part of the security agencies. We totally agree with the Assistant Inspector-General of Police(AIG), Zone 13, Danmallam Mohammed who described the assault on IPOB members by the security agents as “unbecoming and unfortunate”.

“ADF notes the ominous dimension whereby the only two Igbo personnel on the DSS side were the only casualties of the shooting on the side of the security agents. The security personnel were mainly Hausa-Fulani and the only victims were the Igbo elements in the security contingent.

The emerging theory that they were gunned down by their colleagues for purposes of covering up the cold-blooded atrocity, which they may have vehemently opposed, should not be discountenanced.

Mr. Onyike who is the former National Vice President Nigeria UnionJournalists, NUJ, noted further that “The time has come to compel the perpetrators of such pre-judicial killings to pay for their crimes against humanity. There is no law in Nigeria that authorized law enforcement agents to open fire and murder unarmed citizens, under whatever guise, without recourse to investigation and judicial prosecution. Nigeria is not a banana republic where trigger-happy

warlords are let loose to unleash mayhem on peaceful citizens without recourse to due process.

“The so-called proscription of IPOB which was hastily undertaken by the Federal Government ought to have been lifted by now. After all, other more deadly and armed terrorist organisation such as the Fulani

Herdsmen (categorized by the United Nations as the world’s fourth terrorist organisation) are yet to be proscribed by the Nigerian government. Moreover, the set of Igbo leaders who allowed themselves

to be used for the illegitimate exercise have since regretted their actions”.

“The Nigerian Government should learn to engage/ negotiate with the IPOB and other separatist groups fighting for self-determination and discontinue its present brazen policy of brutal massacre of peaceful agitators, such as IPOB.

“ADF calls on the UN, AU, ECOWAS, EU, USA, Britain and the International human rights organizations to immediately institute an investigation into the unprovoked genocide, for the purposes of bringing the state-sponsored murderers to justice. The time has come for the international community to demonstrate to us that they regard us as part of humanity and that Igbo lives also matter,” he stressed.