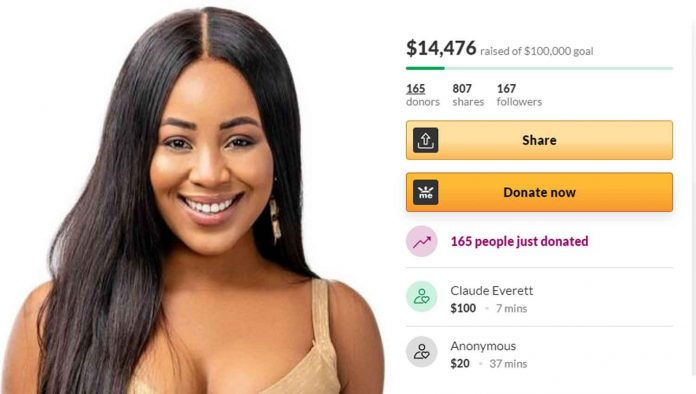 “Las las, this life no balance”, this among others were some of the reactions that trailed the GoFundMe campaign launched for disqualified Big Brother Naija Season 5 Housemate, Erica Ngozi Nlewedim.

Barely 3 hours after her disqualification, a GoFundMe campaign was launched by fans to support her “dreams”, Vanguard reported that more than $9,000 was raised.

As at the time of this publication, the donation has increased to over $14,000.

Based on comments gathered under the post after our publication, it appears the action did not settle well with some Nigerians who claimed it was a misplaced priority.

Among the first to criticise the campaign was Comrade Deji Adeyanju @adeyanjudeji who tweeted: “They have opened a Go Fund Me for disqualified Big Brother house mate -Erica yet they insult those who hold Govt accountable. My generation is acting unaware of all the troubles & suffering in the country. It’s like we want to suffer for 600yrs.”

In a follow-up reaction, early Monday, he posted; “The Go Fund Me they opened for disqualified BBNaija housemate late last night is now close to $15k. LMAO. Which way Nigeria?”

Below are more reactions from Nigerians:

tolu scott @tolu_scott: “It will not be well with anyone complaining about the government of Nigeria. Awon oloriburuku can raise this kind of money in 3 hours.”

Alternative Reality @IGalare: “I’m really disappointed, $1 million dollars within 24 hours would have been the best way to proof their point; which is people with irresponsible behaviours are very many in Nigeria.”

RELATED POSTS:  Every young vibrant Nigerian has been harassed by SARS

Tony @anthonyosazuwa1: “And I’m here, private school maths tutor with no salary since February, nobody gave me 1k but they can raise 9k dolls for an entitled girl who loses all sense of decency inside inside alcohol. Una welldone.”

Sirnucy @IamSan10: “Misplaced priority. Bbnaija is always aired every year during the time students are writing WAEC. Little wonder the rate of failures in WAEC when family gathers to watch bbnaija religiously. The future leaders wil be worst than any bad leader this nation have survived.”

John Christian Alex @jchristianalex: “It is pathetic. Full-grown men and women wasting their lives gathering around the tv to watch BBNaija. Still waste their money on an evicted housemate as they are called while a poor girl next door has no money to buy a textbook for her education.”

Henry Okoludoh @Herodibia: “Fuel and cost of living in the zoological Republic is terrible the 1st class students most could not afford a meal no job, no form of empowerment to lift creative mind etc and behold Nigerians who did this to y’all.”

Ibrahim Yusuf @Tymeexx: “Y not open a GoFundMe campaign for the IDP’s. Some us are part of the problem in Nigeria.”

ⓈⒽⒺⓉⓉⒾ Ⓐ™ @SHETTY8701: “Buhari please increase fuel, electricity, DStv tarrifs again we have too much money. Since we all want to be mad in this country”

RELATED POSTS:  Why Osinachi’s husband will be released – Victoria Inyama

twoTribes @farmuchi: “These are the reasons Govt don’t take us serious”

Vincent Stefan @VincentStefan3: “Most NIGERIANS are very hilarious. Raising more than $9k targeting $100k Why don’t we raise funds for good things? rather than raising for a lady like most people out here. This So-called BBN has taken so many things from the Nigerian Youth.”

bro chuks @chukwudi_adibe: “OMG!! may God have mercy on the young people of this our Generation. people are dying of hunger, sickness in this country, some don’t even know how to feed on daily basis. $9,000 dollars in 9hrs for who… God help us.”

RITA ENGLISH @RITAENG1234: “Slavery of the mind is indeed a TERRIBLE THING! In this same Nigeria where insecurity, food Scarcity and hike in commodities with @MBuhari almost Taxing the AIR WE BREATHE AS NIGERIANS? Lord Please Have Mercy n Help US Before It Might be Too Late, through Christ OUR LORD, AMEN!”

Rotex @rotiminse: “A generation with misplaced priority. What a pity!. They deserve the wishy-washy nincompoop leaders they currently have. These kinds of youths are the worst. E be things.”

All all that donated pic.twitter.com/vddQ65x814