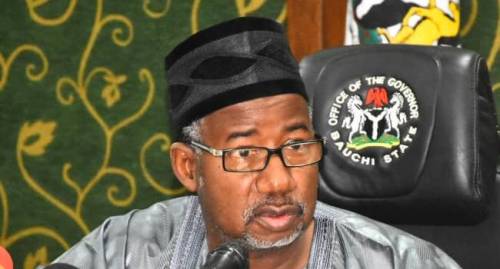 Governor Bala Mohammed of Bauchi State has dared anti-graft agencies that previously investigated him to tell Nigerians if he was found guilty.

Bala, who is one of the presidential aspirants of the Peoples Democratic Party (PDP), said this while addressing members of the National Working Committee (NWC) of the opposition party and other stakeholders, on Wednesday.

The governor challenged the Economic and Financial Crimes Commission (EFCC), the Independent Corrupt and Practices and Other Related Offences Commission (ICPC) and other anti-corruption agencies as he seeks to contest for President.

The EFCC on Wednesday, May 10, 2017, arraigned Mohammed before Justice A. M. Talba of the Federal Capital Territory, High Court sitting in Gudu, Abuja, on 6 counts bordering on abuse of office, false declaration of assets and fraud to the tune of N864 million.

According to the EFCC, Bala, while in office as minister, allegedly received N550 million as a bribe from the Aso Savings and Loans Limited with respect to some properties in the Asokoro area of Abuja.

Mohammed, however, said if elected, he would not be a northern president, but one who captures the nuanced aspirations of every part of the country.

The former FCT minister, who is seeking the support of the committee to emerge as the party’s presidential candidate, expressed the belief that the party would pick the most suitable of the 17 presidential aspirants who have so far obtained their nomination and expression of interest forms.

He stated, “I don’t bear any malice against anybody who investigated me. But I dare anybody to find me guilty because I know my conscience and that’s why I’m still standing here. I dare every investigative agency; I did my best.”

Citing his record in the past three years in office as governor, Mohammed argued that states do not have to be rich before providing infrastructure for their people.

He also noted that he would not be a partisan president only reflecting the desires of the North but all Nigerians who, he said, need good governance, justice and equity.