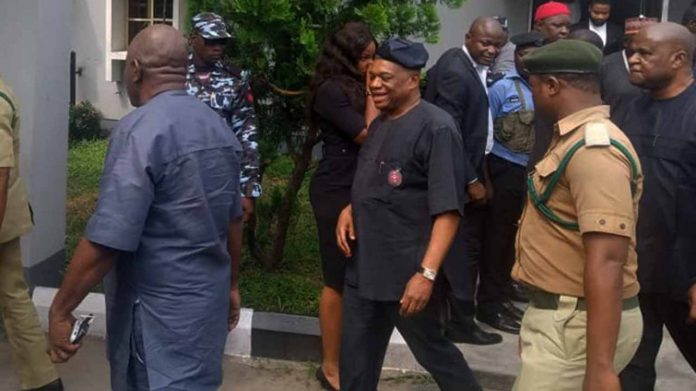 Justice Inyang Ekwo in his ruling, temporarily stayed the re-trial while delivering ruling in an application by Kalu seeking leave to file a motion against his re-trial for alleged fraud committed when he served as governor of Abia between 1999 and 2007.

Justice Ekwo also granted leave to the senator to challenge the legality of the retrial on the same charge.

The judge agreed that the former Abia governor had placed sufficient materials of value before the court to enable him secure permission for judicial review of his retrial on charges which he had been tried, convicted and spent some months in prison.

The Judge also granted Kalu permission to apply for an order of perpetual injunction against the Federal Government through the Economic and Financial Crimes Commission, ( EFCC) to prohibit his retrial.

The court gave Kalu seven days within which to file and serve the EFCC all processes he intended to use to challenge the legality of the retrial.

The matter was adjourned until Feb. 23 for mention.

The News Agency of Nigeria (NAN) reports that Kalu had asked the court to prohibit the EFCC from retrying him on the same alleged N7.1 billion money laundering charge against him.

He contented that having been tried once by EFCC, convicted and sentenced in the same charge, FHC/ABJ/CR/56/ 2007, it will amount to double jeopardy for him to be subjected to a fresh trial on the same charge.

RELATED POSTS:  Nyesom Wike ; 'I’ll Not Leave Burden Of Uncompleted Project Behind For My Successor '

In his ex-parte motion, Kalu asked that if his application was granted, it should serve as a stay of proceedings until the determination of the application or until the judge otherwise orders.(NAN)