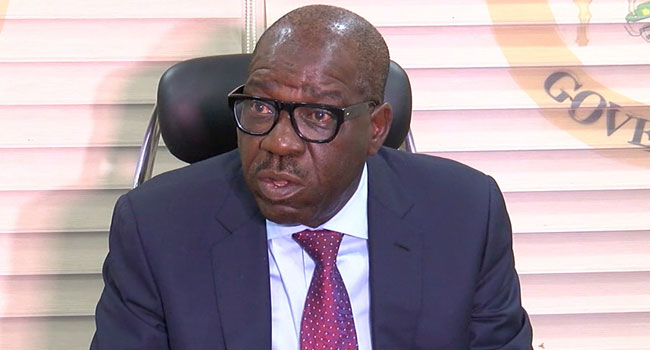 The candidate of the Peoples Democratic Party (PDP) and Governor of Edo State, Mr. Godwin Obaseki, has resumed his ward-to-ward campaign for re-election as governor in the September 19 gubernatorial poll, noting that he will vehemently resist forces fighting to stop his people-centric projects in the state.

Speaking at the palace of the Oliola of Anegbette in Etsako Central Local Government Area of the state, His Royal Highness (HRH) Ugbodaga Yakubu, Governor Obaseki said he had come to seek prayers and support ahead of the election, as he did for his first term.

“I want to assure you that Anegbette will receive more developmental projects in my second term, despite the current economic challenges across the world.”

When his campaign trail hits Wards 9 and 10 in Anegbette, the governor said: “We have built a power plant in Benin City and will replicate the same here. Without roads, electricity and good industries, it will be difficult to develop our state. Our government is all about development and that is what we have done in the last three years and eight months.”

He continued, “We have people fighting us because they want to stop our resolve to develop Edo State, but we are ever ready to ensure the development train continues non-stop. You need to come out en-masse, vote and protect your votes to ensure we come out successful in the election, so we can continue on the path of development. This election is all about progress.”

On his part, Chairman of the Edo PDP Campaign Council, Chief Dan Orbih, accused the candidate of the APC, Osagie Ize-Iyamu, as the one behind the collapse of Bendel Brewery and Edo Line while he served as Secretary to Edo State Government.

He said, “Oshiomhole told us that the former Secretary to State Government now APC candidate, liquidated Bendel Brewery and Edo Line and the loan collected was mismanaged. He failed to keep to the repayment plan, leading to the collapse of these companies.”

On his part, a former PDP governorship aspirant, Kenneth Imasuagbon, received decampees from the All Progressives Congress on behalf of the PDP, as former executives of the opposition party in Wards 9 and 10 along with their followers declared support for the PDP.

Chairmen of the APC in Wards 9 and 10 in Anegbette, Damudu Ibrahim and Momoh Aliu, respectively, pledged their loyalty and support for Obaseki and Shaibu, and promised to deliver 100 per cent of the votes in the wards to the PDP.