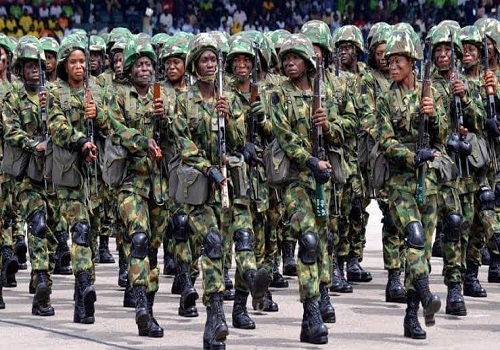 The Nigerian Army issued a statement, that the 82 Division of Nigerian Army, made up of troops of 34 Artillery Brigade, in conjunction with troops of Nigerian Navy, Air Force and other security agencies on Tuesday 30 August 2022 neutralized two combatants of the proscribed Indigenous People of Biafra (IPOB) and its militant wing Eastern Security Network (ESN) along Eke Ututu – Ihitte Nansa road in Orsu Local Government Area of Imo State.

However, an eye witness (name withheld) stated that his “brother in law Ugochukwu Obianeli and his master, Nonso were shot dead by soldiers yesterday around noon or thereabout at a block industry site in Ekeututu market area along the road leading to Ohukabia”.

According to the eye witness, “the soldiers who were in their numbers invaded the market area and when people got the information, they started running away for their safety, but these two young men who were at the block industry site moulding blocks which is part of what they do to earn a living were unlucky as they were shot by the invading soldiers from the Nigerian”.

Information available to Njenje Media has it that an “ elderly man from Ubahaorsu who deals on electrical materials in the said Ekeututu market was shot on his two legs by the second trigger happy soldiers who caught him in his shop were he took refuge as he could not run like other younger ones, and that when the soldiers brought him out of his shop and upon realizing he was a fairly old man instead of killing him, they shot him on both legs and abandoned him to his fate.

RELATED POSTS:  It Raises Serious questions For The Military To Be Hunting For ESN Personnel In S'East While Bandits Sack Northern Communities-- Former ECOWAS speaker

Our report also confirmed that has it that the elderly man later gave up the ghost.

There has been too many killings and destruction of properties of innocent citizens around Orsu by State actors. While this happens, it appears that the government of the day is keeping quiet and stands hands akimbo watching while it’s innocent citizens; whose protection of their lives and properties is its primary constitutional responsibility been destroyed every now and then.

“Ugochukwu, whose wife is from Amaokwe Awo-idemili in Orsu LGA got married to him sometime in 2019 and gave birth to their first and only child in December 2021. The young mother is now a widow”.

Many observers had queried why the Nigerian army will continue the killing of innocent civilians, and questioned why they will not arrest the suspects and subject them to investigations and trial.