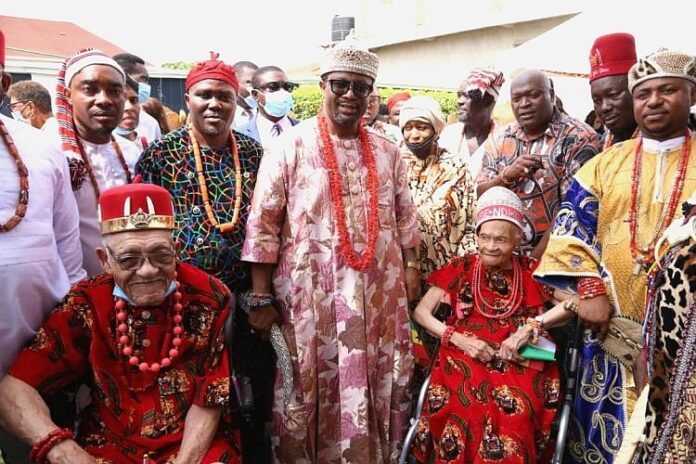 History was made recently as Igbo community in Ghana and the Ghanian government in conjunction with the Nigeria High Commission organised a grand cultural reception for survivors of Tusla, Oklahoma massacre, which took place far back in 1921.

In the Tusla delegation were Hughes Van Ellis, his sister Viola Ford Fletcher, and family members who arrived from the United States.

They were received by the Deputy Director of Diaspora Office at the Kotoka International Airport in Accra, Ghana.

The two survivors of the 1921 Massacre of black people in the US city of Tusla have accepted the offer to be become Ghanaian citizens, as offered to them by the Ghanaian government.

In their response and appreciation to the government and people of Ghana, they said, “we accept the Ghana citizenship with great joy and we thank the President, Nana Akufo-Ado, for his great honour.”

The duo is currently visiting Ghana as part of a week-long tour of Africa to mark the centenary of the killings, known as Tulsa Race Massacre.

Eze Ihenetu thus conferred chieftaincy titles of Ebube Ndi Igbo on Viola Ford Fletcher (The Glory of the Igbo) and Ike Oha Ndi Igbo (Strength of the Igbo) on  Chief Hughs Van  Ellis. Both titles are recognised by the American government.

Going down memory, HRM Ihenetu recalled that up to 300 African-Americans were killed in the attack on the area nicknamed “Black Wall Street” and some 10,000 were homeless when the district was set ablaze, leaving a vibrant economy in ruins.

On why the event was organised, the royal father said it was part of a strategic plan to unite African-Americans in the Diaspora with their kinsmen.

The Eze thus called on other African-Americans eager to reunite with their roots to step forward as African are ready to welcome them back home.

Fletcher and Ellis who were accompanied by their grandchildren on a week-long trip to the West African nation, as part of a government campaign to attract people of African heritage abroad back home, said it was a visit of their lifetime.

In her words of appreciation, Ellis’ daughter, Mama, said: “It’s my first time on the continent of Africa and I’m just thrilled to be here.”

Ike Howard, Fletcher’s grandson said: “My grandparents are extremely excited to be home for the first time on the motherland. If you haven’t visited Africa, this is the time to come.”

HRM Ihenetu, therefore, urged other African-Americans in the Diaspora to identify with their kinsmen in Africa by realigning with their roots as this measure will give them sense of belonging.

Nigeria’s Security Not For The Ruling Party Alone — Bukola Saraki

Alaafin Expresses Sadness Over Igangan Killings, Calls For Use Of Native...