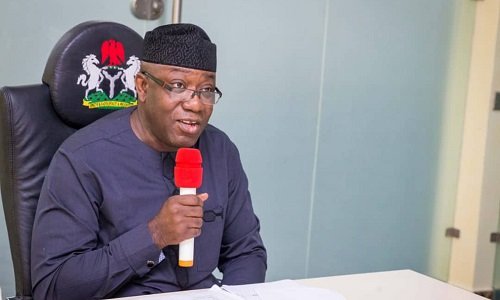 He recalled that the party had projected restructuring as a core manifesto and set up the El-Rufai Committee to make recommendations to its leadership.

Fayemi said not only has the panel submitted its report, but concrete steps had also been made to make proposals to the National Assembly.

He drew attention to the commencement of constitution review by the Omo-Agege Committee, saying that it has rekindled hope and public trust.

The NGF chairman spoke with reporters in Lagos on preparations for the second year anniversary of his second term, gains and constraints of the administration, conflicts in Ekiti APC and agitations for true federalism.

Fayemi said true federalism will engender confidence among stakeholders, adding that the onus is on the Nationa Assembly to look at the previous reports of National Conferences and committees on constitution review.

He said many recommendations along the line of restructuring, devolution and true federalism were embedded in the reports of the Niki Tobi Panel, the 2004 Conference set up by former President Olusegun Obasanjo and the 2014 conference established by former President Goodluck Jonathan.

In recent times, the clamour for a constitution amendment to reflect restructuring has been intensified by many stakeholders, ethic nationalities and pro-constitutional reform groups.

Some of them are even threatening to push for succession or disintegration of the country if the current federal arrangement is not redesigned or reconfigured.

RELATED POSTS:  As Nigerians scramble for PVC, INEC is not helping matters

Many founding fathers of the APC have been advocating true federalism, even before the birth of the party in 2014.

President Muhammadu Buhari was present when the El-Rufai Committee submitted its report. Although the report has not been made public, sources close to the panel said it made recommendations along the lines of fiscal federalism, decentralised and multi-layer policing,  devolution of some powers to component units, control of local governments by states, and reduction of items on the Exclusive List.

The Ekiti governor, who refrained from delving into the core recommendations by the committee, acknowledged the criticisms against the current defective federal structure.

Fayemi said:” We must confront our reality as a federation. The current structure is supportive of the unitarist model. The state structure, for now, is problematic.  There is a need to move towards devolution, not only of functions but also resources.”

The governor also spoke on the quest for decentralisation of security, noting the actualisation of the Southwest outfit, Amotekun, and efforts by the Federal Government to kick off community policing.

He said local policing is meaningful and more effective when it is premised on the potency of intelligence gathering in the local environment.

Drawing a link between effective security and the local environment, Fayemi said:” Security cannot be unitarised. It must be devolved.”

The governor also took cognisance of the protagonists and antagonists of constitution reforms, saying: “There are entrenched conservative interests to keep Nigeria the way it is. There are also entrenched interests to reform Nigeria.”

Reflecting on the activities of agitators for succession, Fayemi said:” Nobody wants Nigeria to break up. They only want Nigeria to work for all of us.”

The governor, who gave his administration a pass mark in Ekiti, pointed out that the lean resources have been the major constraints.

He said his administration has delivered on legacy projects, attracted investment and funding from many organisations, restored the core values and intensified efforts on the proposed cargo airport.

Fayemi noted the intensified intra-party conflicts in Ekiti APC, saying that it is not borne out of exclusion, but triggered by permutations for succession in two years’ time.

He said his administration has accommodated all stakeholders as reflected in the appointment of five governorship aspirants as commissioners, one contender into the Federal Character Commission and the election of another two into the House of Representatives.

The governor lamented the reluctance of some chieftains to heed the advice of the APC national leadership to explore the internal mechanism for conflict resolution and withdraw all court cases.

He said he was not distracted by the activities of those behind the conflict.

Fayemi, who said there are no factions in the chapter, said the disciplinary committee set up by the party was based on the directive of the national leadership.

The governor emphasised that he differed from the opinion of some people who believed that the resources of the state should be shared.

He added:” However, it is in our interest to have a united party. There is a local reconciliation Committee headed by the former chairman of the party, Chief Jide Awe, where they could ventilate their grievances.  Its report has been submitted.”