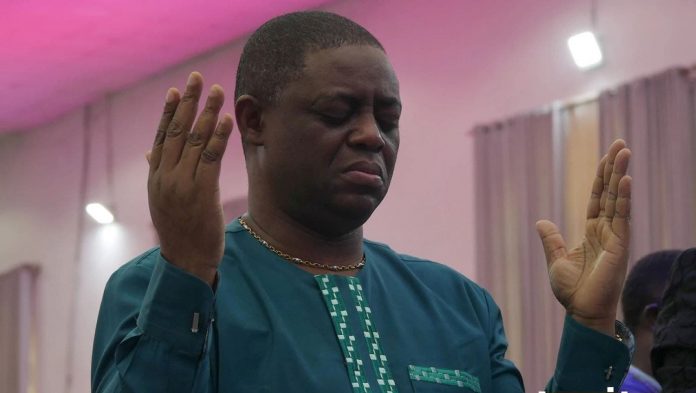 The chairman of the Lagos state chapter of the Christian Association of Nigeria (CAN), Apostle Alex Bamgbola, has recently told the former Aviation minister and chieftain of the People’s Democratic Party, PDP, Chief Femi Fani-Kayode that he will become the president of Nigeria if he remains humble.

Apostle Bamgbola made the pronouncement in Lagos on Sunday, August, 30, at the occasion of Bishop Isaac Idahosa’s celebration of 31 years in ministry.

Fani-Kayode, who has been in the news recently for insulting a journalist, swiftly went on his knees to claim the pronouncement.

Apostle Alex Bamgbola has told Femi Fani-Kayode that he will become the president of Nigerian someday if he remains humble. Photo credit: UGC Source: UGC In a video captured by Legit TV’s Monday Idara, some men of God subsequently joined hands to pray for the controversial politician and former minister of aviation.

He said any law that seeks to regulate the affairs of the church is evil, adding that those that made the law are also evil. Fani-Kayode said: “My position is simple. You cannot regulate the affairs of the church. The church of years has stood for many years; hundreds of thousands of years ever since it was established. “And great powers have come and gone that tried to destroy it; it’s never worked and it can never work.

And any law that seeks to regulate the affairs of churches is absolutely evil and I consider that section of that act to be evil. And those that proposed it are evil and it’s unacceptable. And we will not take it, and it will never stand in Jesus’ name, that’s my position.”

All rights reserved. This material and any other digital content on this platform may not be reproduced, published, broadcast, written or distributed in full or in part, without written permission from VANGUARD NEWS.