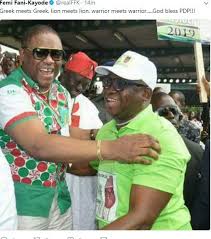 Former Ekiti State Governor, Mr Ayo Fayose, has said that former minister of Aviation, Chief Femi Fani-Kayode, told him he is not joining the governing All Progressives Congress (APC).

Fayose made this known on a programme on Channels TV, and added that he himself can never defect to the APC stressing that while PDP made him all he is today politically, those who defected to the APC have nothing to show for it.

While responding to a question on Fani-Kayode purported planned defection to APC, Fayose said, he knows the former minister isn’t going to the APC because he has asked him several times about it.

“If he leaves PDP and joins the APC, he will be dead as a frontline politician.” He might not be a day to day politician but he is a fighter. I have spoken to him and he said he is not going  to APC and I told him to speak up.”

The former Ekiti governor rubbished insinuations in some quarters that he might defect to APC, asking of those who left PDP for APC, of what value has it been for  them.