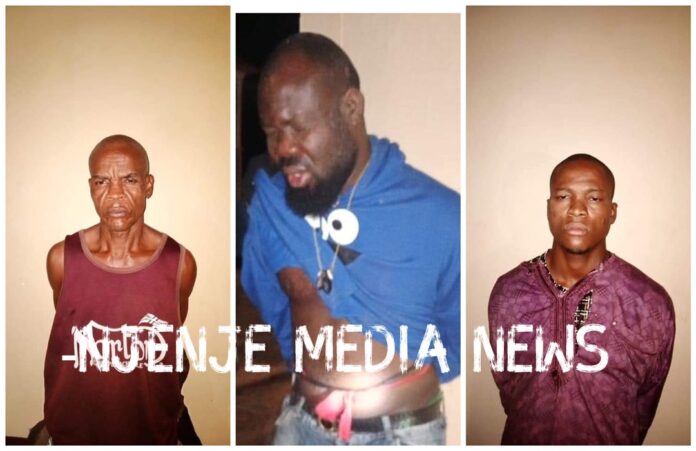 The International Society for Civil Liberties and Rule of Law has received with rude shock, disbelief and dismay the burning to ashes together with a red 2013 model Toyota Camry car (belonging to Barr Ifeanyi Ejiofor) of the slain body of Citizen Samuel Okoro (Gentle BIGGY) by a joint team of soldiers, police, DSS and Civil Defense personnel, called ‘NHSS Tactical Team’. The killer-NHSS Tactical Team is understood to be operationally led by the Nigeria Police Force at the Force Headquarters in Abuja and directly answerable to the Inspector General of Police, Alhaji Alkali Usman Baba.

Intersociety’s further investigation showed that the dastardly act took place about 30 minutes after the invading killer security operatives left the family house of Barr Ifeanyi Ejiofor at Oraifite in Ekwusigo Local Government Area of Anambra State and headed to the Anambra State Police Command headquarters at Awka. The killer-squad had invaded the Human Rights Lawyer’s family house at about 2.30am in the wee hours of Sunday, 6th June 2021, surrounded same and condoned off all exits and entries, shooting indiscriminately and laying the area under siege for over an hour and half, after which they left at some minutes after 4am of the same morning.

We had earlier informed the world that four innocent citizens involving the Lawyer’s elder brother, Joel Ejiofor, driver, Elder Felix Emeka Okonkwo who is 55 years of age; the Lawyer’s gardener/flower cutter and compound sweeper, Lawrence Ugochukwu Okafor, 20 years old and gateman, Ikenna Chibuike, 35 years old; were abducted and taken away after the Gestapo invasion and attack. The duo of the gardener and the gateman had lived in the Lawyer’s family house at Oraifite for years while his driver and personal assistant live with him in his Abuja residence. The fifth innocent citizen, Samuel Uzo Okoro, 43 years old Lawyer’s Personal Assistant for many years, was shot and killed in the premises of the Lawyer’s family house and Joel Ejiofor, his elder brother was abducted and later pushed out at Ojoto Community from one of the fifteen Hilux vans with which they invaded the family house and had since returned home alive and unhurt.

It is our further information that Barr Ifeanyi Ejiofor’s driver, Elder Felix Okonkwo was forced to join the convoy of the killer-NHSS Tactical Team and drive his boss’s 2013 model red Toyota Camry car with the slain body of the Lawyer’s Personal Assistant, Samuel Uzo Okoro, dumped in the Camry car and after about 30 minutes drive and on getting to Okacha Junction, Nneni in Anaocha Local Government Area of Anambra State, the killer-squad stopped and ordered Barr Ejofor’s driver out of the Camry car and join one of the fifteen Hilux vans. The ‘NHSS Tactical Team” of soldiers, police, DSS and Civil Defense personnel immediately soaked the Toyota Camry car and the slain body of Samuel Uzo Okoro with Premium Motor Spirit and set them on fire leading to them burnt to ashes. The burning took place after the Lawyer’s elder brother, Joel, was pushed out of the killer-squad‘s convoy at Ojoto in Idemmili South Local Government Area of Anambra State. The videos and photos of the charred or burnt and blackened body of the Lawyer’s Personal Assistant and the Red Toyota Camry car with which he was burnt to ashes have gone viral, trended and still trending in the social media. The videos and photos included where his family members were struggling to gather together his remains for interment. See below graphic video.

Intersociety has also stumbled into a leaked intra security agency’s signals forwarded by the killer-squad to their superiors, informing them the outcome of the murderous operation. Titled “Arrest of Four High Profile ESN Members in Anambra State”, the killer-squad in the leaked wired signals called themselves “NHSS Tactical Team” signals and claimed as follows: “that they carried out operation on 6th June 2021 in the residence of Barr Ifeanyi Ejiofor, the legal adviser of IPOB in Oraifite, Ekwusigo, Anambra State at 0315 hours and arrested four top commanders of ESN that have been terrorizing Anambra State and its environs”, that “Gentle Lion (refereeing to the Lawyer’s slain Personal Assistant, Samuel Uzo Okoro), No 5 on the wanted list who died while trying to escape from arrest”, that “in the course of the arrest, charms, red Toyota Camry and IPOB items were recovered”, that “meanwhile the other three suspects are in the command holding facility for interrogation and further action” and “attached are the pictures of the targets, forwarded for your information and further action please”. The leaked ‘signals including photos of the three innocent domestic staffers of the Human Rights Lawyer are hereby attached.

Consequently, Intersociety is putting the UN Rights bodies, the International Criminal Court, the United States, the EU, Canada, UK, international human rights bodies and human rights research institutions; local and international media on notice and firmly demands pressures and proactive concrete steps from them concerning the above and other grisly and egregious human rights abuses and violations by Nigeria’s present security forces. It saddens our heart that the above named institutions and bodies have kept quiet and slumbered, watching and allowing the country’s political administrators and security forces to steadily, deeply, gravely, maddeningly and rapaciously turn the state’s instruments of violence against defenseless and unarmed population particularly the Christian citizens of Old Eastern and Mid Western Nigeria.

It is universally unheard of, that security operatives kept and sustained with citizens’ tax payers and other collective wealth could beastly or wildly go as far as invading legally recognizable and respected citizens such as licensed legal practitioners’ family houses at the dead of the night and abduct them alongside their wives in their nakedness with intent to humiliate and degrade them including setting them and their properties on fire and roguishly labeling them so as to escape being detected or held criminally and legally culpable. The world must therefore act now on Nigeria and its butchery Government before it is too late because nobody including state actor agency holds a monopoly of violence.

Reference: Pieces of supporting evidence are assembled in a different file and forwarded as appropriate.