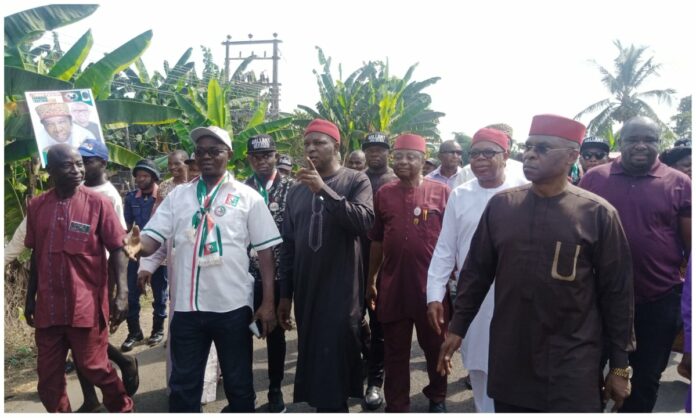 The Labour Party governorship candidate in Enugu State, Hon. Chijioke Edeoga has suspended his planned campaign in some wards in Eha-Amufu, Isi-Uzo Local Government Area of the State.

He made the announcement during his visit to the area on Tuesday.

Suspected Fulani herdsmen were alleged to have invaded Eha-Amufu communities again on Monday night and slaughtered many residents, a development that has turned survivors into refugees as they could be seen fleeing homes.

Speaking on the development, Edeoga who visited Eha-Amufu Ward 2 and Eha-Amufu Ward 4, said every campaign in the area would be put on hold in honour of those who lost their lives to the unprovoked attack.

“We were to start from Ward 3 but we suspended it because of the killings. We have also postponed campaigns in other communities in Eha-Amufu here. We are so saddened over yet another killing of innocent people in our place.

“While we sympathise with the families of the victims, I want to assure you that all these will end when we win this election and are sworn-in by May 29, 2023,” he said.

Edeoga told his audience that his emergence as Labour Party guber candidate in Enugu State was as a result of pressures from well meaning people of the State, as well as the Presidential candidate of the party, Mr. Peter Obi.

According to him, “I’m into the race for service. After the PDP primary election, I decided to rest but pressures kept coming from all quarters in Enugu State, women, youths, elders.

“Even Our Presidential candidate, Mr. Peter Obi called me on the phone to come and contest; he said he wants me to fly the party’s flag. I was hesitant until it got to a point that I had no choice but to answer the call.”

He urged the people to support his candidature and that of other Labour Party candidates, as according to him, “the PDP has collapsed in Eha-Amufu, Enugu State and South-East. There is so much injustice and lies in the PDP; you can see how they denied Southern Nigeria the presidential ticket; so what are they going to tell us?”

Also speaking the State Chairman of the Party, Mr. Casmir Agbo expressed sadness over the killings by Fulani herdsmen.

He urged the people to keep faith with the Labour Party for an end to such killings, he said they should ignore any claims that Edeoga was no longer the party’s candidate.

“The Labour ticket with him is an act of grace. What they are doing now is spreading falsehood. But I’m telling you today as the chairman of the party that our guber candidate is Rt. Hon. Chijioke Edeoga.

“Don’t listen to gossip. We are taking over Nigeria with Peter Obi and Edeoga in Enugu,” he boasted.

At the different places he visited, the communities presented a charter of demands, with Edeoga assuring them that their needs would be met if he emerged victorious in the polls.