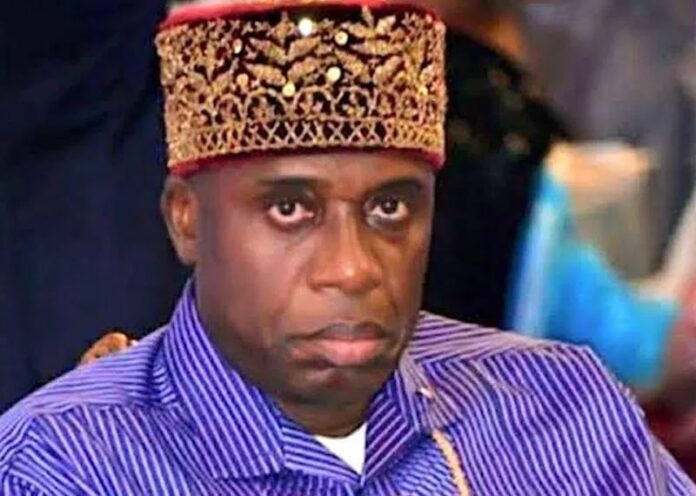 The Minister of Transportation, Rotimi Ameachi is currently in the middle of a scandal as he is being accused in a leaked memo of wanting to award an N3.7 billion contract to a company that has his father, mother, and child as directors and without a major original equipment manufacturer (OEM) supplier for surveillance equipment, Njenje Media News reports.

It would be recalled that terrorists on Monday night attacked an Abuja-Kaduna train, killing some passengers and abducting many.

The train was ambushed while it was a few minutes away from the Kaduna station. At least eight persons were reportedly killed while several others were injured and abducted.

Amaechi after visiting the scene of the attack, in a series of tweets, averred that the agencies that need to grant approvals for the monitoring of rail lines in Kaduna and across the country should do so to forestall these types of attacks.

“Again, I call on all agencies that need to give approvals for the surveillance equipment and sensors for effective monitoring of the rail tracks to do so quickly, to forestall attacks like this,” the minister had tweeted.

According to a leaked memo the Punch said it obtained, the federal executive council (FEC) rejected a proposal for the installation of security equipment along the Abuja-Kaduna rail track presented by Amaechi because they “had doubts about the capability of a company”.

In the minutes of the FEC meeting dated September 24, 2021, Amaechi proposed that a company, Mogjan Nigeria Limited, be awarded the contract worth N3.7 billion.

The meeting was presided over by Vice-President Yemi Osinbajo as President Muhammadu Buhari was attending the United Nations General Assembly at the time.

Checks by TheCable showed the company was registered on September 29, 1999 and has Godwin Momoh, Chioma Momoh, and George Momoh as board of directors, but appears to have commenced operations in August 2019.

This implies Amaechi presented a proposal on a contract worth N3.7 billion to FEC over a fledging company which has father, mother and child as directors and with no major original equipment manufacturer (OEM) supplier for surveillance equipment.

“We had doubts about the capability of a company, which was formed less than two years prior and had no track record of handling a contract of N3.7bn or a contract on surveillance systems. The company was also to be paid upfront. Our investigation pointed to a conflict of interest,” the Punch quoted a source in the presidency as saying.

According to the memo, Amaechi in his presentation at the meeting indicated that the Bureau of Public Procurement (BPP) had examined the procurement process and issued the contract a certificate of no objection and that the project would be funded by the ministry’s N71.4 billion budget.

Amaechi then requested that the council “approve the award of contract for the procurement and installation of electronic surveillance system and interrogation unit on the Abuja (Idu)-Kaduna (Rigasa) 200km railway monitoring rail intrusion detection system and emergency response system in favour of Messrs Mogjan Nigeria Limited/Cagewox Dot Net Limited in the sum of N3,780,827,410.66 inclusive of 7.5 per cent VAT with a completion period of four months”.

But ministers criticised the capacity of the company to execute the project as well as Amaechi’s inability to provide adequate clarity on the equipment capabilities.

RELATED POSTS:  Baked Cakes Made With Cannabis Intercepted By NDLEA On Lagos-Ibadan Expressway

“Some members expressed concern about the quality of the memorandum as there was no description of the surveillance system concept note, brand name, country of manufacture or review by the previous user to enable them to make informed decisions,” the memo reads.

“They stated that as sophisticated as the surveillance system was touted to be, there were no indications that it had been demonstrated and tested by the security technology agencies. They equally observed that all the projects were lumped together under one budget line, which they noted was not good enough as each rail line project was supposed to be captured in its individual budget line.”

The vice-president said the solution system was “described in a generic term and whether it had a brand name, adding that the system, being a rail equipment monitoring solution, ought to have a brand name and a comprehensive description of its functions”.

The vice-president was said to have “directed that in view of the observation raised by members, there was a need for the ministry to provide further description of the equipment, its brand name, manufacturer and how it worked”.