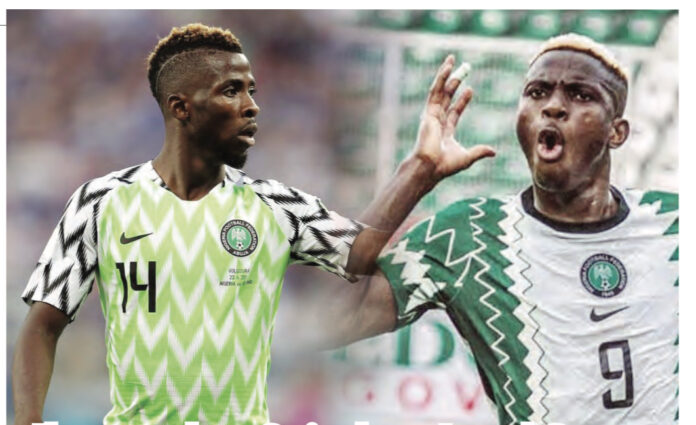 Njenje Media News reports that Iheanacho is the team’s current most in-form striker with seven goals in his last four appearances for Premier League club, Leicester City while Osimhen, despite his struggles at Serie A club Napoli is the leading scorer in the qualifiers with four goals.

Nigeria, three-time African Champions, would make the 19th appearance at African football’s flagship tournament if Sierra Leone and Lesotho are locked in a stalemate in their early game in Maseru slated for today. But the Eagles are insisting on focusing on their own game and result rather than wait for help from one bumpy pitch in southern Africa.
Meanwhile, Squirrels of Benin Republic striker, Steve Mounie, say they are fired up for the game against Nigeria, insisting that they are not scared of Super Eagles.

“We all feel very good, very happy to have been able to travel, to come to the country to help the nation to qualify for the 2021 AFCON,” Mounie told bjfoot.com.

“We trained well this week and we are ready for this match. The ideal scenario would be for Lesotho and Sierra Leone to play a draw. And that we will only have to draw or win against Nigeria to qualify”
The Brest of France striker however lamented the absence of fans for the game.

“For us, it is a handicap to play without the fans. We know that they are always behind us and that they support us strongly during our home matches,” Mounie added.

“They are really the twelfth man, not having them with us, we’ll miss that for sure. We hope that they will support us in front of their TV, pray for us and that we will all qualify together.