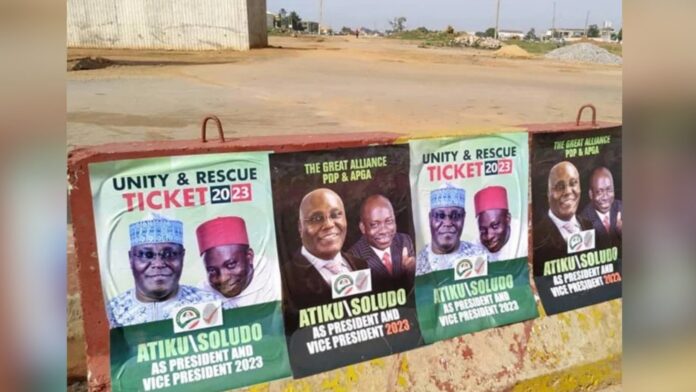 Posters bearing ‘Atiku for President in 2023’ and Charles Soludo for Vice President have been sighted at different parts of Abuja.

The campaign materials claimed that only the Atiku-Soludo alliance can rescue Nigeria from the brink of collapse.

Reacting, Atiku distanced himself from the posters, saying he was spending his time finding solutions to Nigeria’s problems.

A statement signed by Atiku’s Spokesman, Paul Ibe, urged Nigerians not to be misled by the disingenuous plot because he knows nothing about the posters or those who may have promoted it.

Atiku maintained that the posters were the work of mischief, urging Nigerians to ignore them.

“For the avoidance of doubt, Atiku Abubakar is of the PDP while Charles Soludo is of APGA. It is silly of anyone to attempt to drag the former Vice President into an election in Anambra which outcome will be determined by the people of the state.

“Atiku Abubakar is presently preoccupied with joining hands with other well-meaning Nigerians to help in finding solutions to the myriad of challenges plaguing our nation such as insecurity and economic downturn marked by joblessness and extreme poverty,” the statement read.

You Are For Buhari, Not Yoruba People—Yoruba Group Tackles Tinubu, S’West...