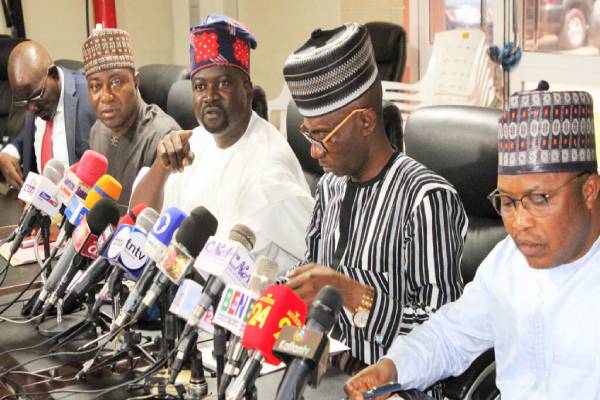 At a press briefing at the Kogi Liaison Office in Abuja, the state commissioner for Information, Kingsley Fanwo, described the alleged order as blatant lies told against the state government before the Lagos Division of the Federal High Court by the Economic and Financial Crimes Commission (EFCC).

Mr Fanwo further stated that the misinformation in a section of the media is capitalized upon by those he described as ‘shameless political vested interests.”

He added that the allegation that the Kogi State Government authorized the opening of a fixed deposit account wherein it deposited the said Bailout a loan of 20billion to generate interest for itself is false. He stated clearly that the Kogi State Government gave no mandate or instruction to Sterling Bank Plc to open a fixed deposit account on its behalf as it could barely meet the salary obligations for which the funds were received at the material time.

The commissioner however said, while the state is yet to conclude on the EFCC’s motive for this dishonorable act, it cannot but wonder if the ‘new’ EFCC is now lending its pieces of machinery for the use of politicians and detractors to tarnish the image of a State that has enjoyed the confidence and commendation of domestic and international partners as a bastion of accountability and integrity.

Read the full statement below

1. The Government of Kogi State has called this Press Briefing to debunk the blatant lies told against her before the Lagos Division of the Federal High Court by the Economic and Financial Crimes Commission (EFCC), amplified in the media by sections of the Press and capitalized upon by shameless political vested interests.

2. Two days ago the Nigerian media space became awash with news of an ex-parte Order of the Federal High Court, Lagos Division allegedly freezing Sterling Bank Account No. 0073572696 which the EFCC, in court documents sighted by us and for reasons best known to her, had fraudulently represented to the court to be a fixed deposit account opened and operated by the Kogi State Government into which Bailout Funds approved by the Federal Government and sourced from the Bank were diverted and kept from their intended purpose, which is the payment of salaries to workers.

3. The EFCC also swore under oath before the court that her own investigations confirmed part of the funds corresponding to the Biblical Mark of the Beast in the amount of N666,666,666.64 to have been misappropriated by the Kogi State Government.

4. The Commission even swore that as of a specified date this year, to wit, April 1st, 2021, which is, of course, the globally notorious April Fools’ Day, the sum of N19,333,333,333.36 was allegedly standing to the credit of the account into which we had allegedly diverted and fixed monies meant for the payment of salaries to our workers. The EFCC alleged to the court in self-righteous indignation that she sought an ex parte order to secure the balance of the alleged funds still in the account from further dissipation pending investigation and possible prosecution of unnamed malfeasors.

5. Sections of the media ran with the EFCC’s fantastical tales – unverified, unexamined, and unchecked. They serially reported that the alleged funds in the alleged account were a loan sought and obtained by the Kogi State Government from Sterling Bank Plc in 2019 to pay salaries to workers which were later deposited in a fixed deposit account upon the instruction of the Kogi State Government, and allegedly to yield interest and with parts of it dissipated for other unascertainable purposes other than payment of salaries.

6. Gentlemen of the Press, for the records, the Kogi State Government vehemently denies having the sum of N19,333,333,333.36 or any other sum in a fixed deposit account with Sterling Bank Plc as alleged. The Kogi State Government states that it never gave any instruction to Sterling Bank Plc and the said Bank also did not fix on its behalf, any bailout fund or any other funds. The Kogi State Government states that as of the 23rd Day of July 2019 when she allied the monies for the payment of salaries and allowances to Kogi State civil servants and up to the 31st day of August 2021 when the purported court order was procured, it had approximately N46,000,000.00 cumulatively in all the salary and bailout accounts it operates with Sterling Bank.

7. Now to the background. Upon the assumption of office of the current administration in Kogi State, the State was in arrears of Salaries and allowances to Civil Servants and Pensioners more than N50 Billion Naira. The previous administration had applied for Bailout funds from the Federal Government to settle the said areas but could not access the funds until the expiration of their tenure. H.E Yahaya Bello, therefore, pursued the Bailout fund applications and secured Mr. President’s approval for the funds which were disbursed in tranches. Specifically, in July 2019 the President graciously approved the payment of the final tranche of the bailout loan to the State which came by way of an on-lending loan from the Central Bank of Nigeria via Sterling Bank Plc. Sterling Bank Plc disbursed the said loan using the Kogi State Bailout Loan AccountNo. 0073522756 on the 23rd of July 2019. (Here is a copy of the Statement of Account).

9. The current balance in the said Kogi State Bail Out Accountant as of the date of the alleged ex-parte Order is the sum of N999,190.50. Accordingly, the allegation that any part of the bailout fund was not used for the purpose for which it was secured is not only patently false, it is malicious and unsupportable by any records, including bank statements relating to all material times.

b. That the allegation that the Kogi State Government authorized the opening of a fixed deposit account wherein it deposited the said Bailout a loan of 20billion to generate interest for itself is false. The Kogi State Government gave no mandate or instruction to Sterling Bank Plc to open a fixed deposit account on its behalf as it could barely meet the salary obligations for which the funds were received at the material time.

c. That Sterling Bank Plc by its letter of 1st September 2021 confirmed in writing that the ‘the Kogi State Government does not currently operate or maintain a fixed deposit account with Sterling Bank’. Here is a copy of that letter. The letter proceeded to confirm that all the balances in all the accounts operated by Kogi State Government were approximately N46 Million Naira. Finally, the letter confirmed that account number 0073572696 cited in the alleged order of the Court is ‘an internal (mirror) account operated by the Bank to manage the Kogi State Bailout Facility’.

11. Having laid the facts bare before you gentlemen of the press, we are still shocked as to how the EFCC came about the patently false information upon which they have fraudulently or by misrepresentation of facts secured the purported order freezing a non-existent account or a ‘mirror account’ created for administrative purposes by the Bank in respect of funds which have since October 2019 been fully disbursed and utilized for the purpose for which it was borrowed.

12. We want to put it on record at this point that at no time during this entire concatenation of unfortunate events did the EFCC invite or question, much less seek clarification, from this Government or any of her officials about such weighty matters. Also, none of the media houses or platforms which initially broke the news so much as sought comment from us. No doubt our rights to a fair hearing and the nation’s right to fair and accurate reportage did not matter in the circumstances of this shabbily designed but otherwise clinically executed hatchet job.

13. This is neither happenstance nor coincidence, but a coordinated hostile action. We remain concerned that a Federal Agency of the caliber and responsibilities of the EFCC which is charged to combat financial fraud is the one engaging in fraud and misrepresentation of facts to secure needless Orders meant to ridicule a court of competent jurisdiction while simultaneously attempting to drag the pristine white robes of the most transparent and accountable state government in Nigeria, to with, the Kogi State Government led by His Excellency, Governor Yahaya Bello in their barrel of palm oil.

14. While we are yet to conclude on the EFCC’s motive for this dishonorable act, we cannot but wonder if the ‘new’ EFCC is now lending its pieces of machinery for the use of politicians and detractors to tarnish the image of a State that has enjoyed the confidence and commendation of domestic and international partners as a bastion of accountability and integrity.

15. Kogi State of Governor Yahaya Bello is the only state ever to score 100% in the States’ Fiscal Transparency, Accountability, and Sustainability program of Nigerian states. We recently received commendations from the Office of the Accountant General of the Federation for being one of the very few states to have adopted the IPSAS Accrual Basis Accounting which is to enhance transparency and accountability in financial reporting in the public sector.

16. While we cannot estimate the extent of the damage caused by this unwarranted attack of the EFCC to the image of the State, and the reputation of the Governor and his entire team, including members of the financial team whose names have been mentioned and preserved forever on the internet about this disgraceful episode, we believe, apart from other legal actions which will be taken against the EFCC, that this press release is most necessary to set the records straight and disabuse the minds of Nigerians who have received this fake news.

17. Consequently, we urge Nigerians to know that the various news surrounding the alleged conversion of salary bailout funds in Kogi State is fake, the allegations and acts are those of malicious men and women employing the pieces of machinery of Government to do the bidding of their seen and unseen allies.

18. The Kogi State Government will seek appropriate redress and will resist most vehemently, the instant attempt and any further attempt to bring her into disrepute.

19. His Excellency, Governor Yahaya Bello, and his New Direction Administration in Kogi State would like to assure our citizens, partners, investors, and the general public that our commitment to transparency, probity, and accountability in office will remain unrivaled in the country. We shall continue to provide good governance and the dividends of democracy without unwavering and despite unholy distractions such as this one. We shall also continue to expand our investments in the Security, Unity, Peace, and Prosperity of all our People while promoting cooperation and integration, Affirmative Action, youthful endeavor, equality, equity, and justice as the basis for our co-existence as citizens of one state and one nation.