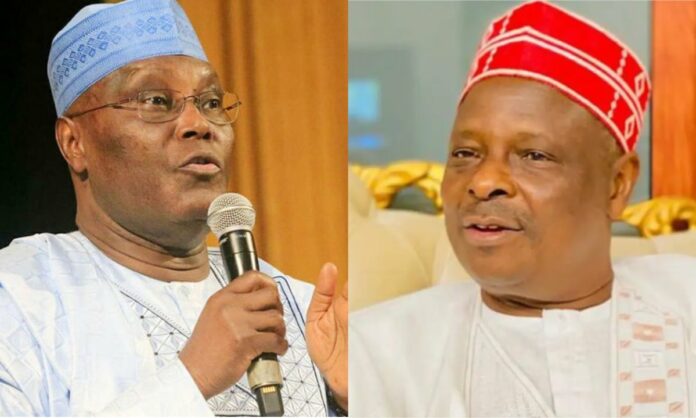 There are permutations that the presidential candidates of the Peoples Democratic Party, PDP, Atiku Abubakar and the New Nigeria Peoples Party, NNPP, Rabiu Kwankwaso, may split Northern votes in favour of their All Progressives Congress, APC, counterpart, Bola Tinubu.

Our sources report that Kwankwaso enjoys a large followership in the North through his Kwankwasiyya group, which has its base in Kano State.

Like Kwankwaso, Atiku also enjoys a large followership in the North, a situation that could lead to the split of Northern votes during the February elections.

But observers say while Kwankwaso and Atiku will split the Northern votes, the 14 APC governors in the region would ensure Tinubu wins the February poll.

Speaking with our sources, a popular columnist, Fredrick Nwabufo, said: “Asiwaju Bola Ahmed Tinubu is the candidate with the obvious advantage.

“There are 14 APC governors in the northern States who are supporting Asiwaju, coupled with the popularity of President Muhammadu Buhari in the north, who is on the campaign trail with Asiwaju. No other candidate comes close to the goodwill Asiwaju Tinubu enjoys in the north.”

Also, the Arewa Youths Consultative Forum, AYCF, National President, Yerima Shettima said most of the governors in the North are APC members, who would go all out to ensure that Tinubu wins the February election.

Shettima: “There are all possibilities that it’s what would happen next month because they are the only two Northern candidates; they have their forces and little structures; this is why this favours the APC presidential candidate.

“Tinubu knows that the North is going to be more useful and productive because he knows he’s going to have the Southwest and will likely divide the votes in the South South.

RELATED POSTS:  Nigeria: Who Decides Which Ethnic Nations Will Form Any Union Together?

“Going by my analysis as a lay man, the votes will be in favour of the APC candidate.

“The Southeast which is Atiku’s stronghold, Peter Obi has dominated that region.

“The vote will not go one way this time; Shettima is a stakeholder in the Northern part of the country and he is going to have sympathy votes. At the end of the day, APC will have an upper hand. Most of the Northern governors will vote in favour of their party.”