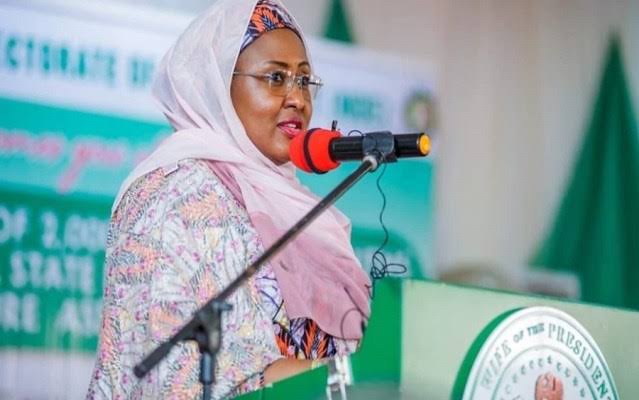 The wife of Nigeria’s  President, Mrs. Aisha Buhari has in a new book bared her mind on issues in her marriage, her husband government among others, Njenje Media News reports.

In a book entitled, ‘Aisha Buhari: Being Different’, by her special assistant, Hajo Sani, the outspoken Aisha said she did not ordinarily set out to put her husband government in the jugular but her comments are meant to be a wake-up call for people in power to do the right thing and bring about a positive policy change.

In the book to be launched today Thursday, she said whenever she spoke, she hoped to touch the sensibilities of those in charge and inspire them to take corrective action.

The first lady also explained that the first interview she granted to BBC Hausa Service was distorted by disgruntled media groups.

Hajo Sani, the Senior Special Assistant to the President (SSAP) on administration and women affairs in charge of the Office of the First Lady, the author of the book also recalled that many would not  forget the other room metaphor which occurred during President Buhari’s visit to Germany where he responded to a question at a joint press briefing with the German Chancellor, Angela Merkel.

According to her, the president in a lighter mood laughed off a question about his wife to a BBC interviewer by saying, “I don’t know which party my wife belongs to, but she belongs to my kitchen and my living room and the other room .”

“His remarks immediately went viral on social media, with some people calling for and expecting a rebuttal from Aisha. Meanwhile , she never contested the statement or queried her husband . This is vintage Aisha Buhari. Married for decades, she understands her husband’s mindset and sense of humor, a side of him that the public may not see or appreciate.

“However, that controversy did not in any way discourage her from regularly and consistently intervening on national issues, particularly concerning party politics and governance”, the author noted.

Sani also cited instances where the First Lady had shared videos on social media that went viral and sparked controversies, noting that Aisha‘s motive in sharing posts like these is two-fold.

According to him, “The first is that she is moved by her humanitarian nature to identify with the general feelings of the people. Secondly, she desires to draw the attention of policymakers to the issues of the day .

“By sharing these posts, there is a tacit admission on her part that the administration, of which she is a part, is not perfect and can make mistakes and she is humble enough to acknowledge this. If your house is burning and you admit to it, even the critic might lift a bucket of water to help drown out the flames.

“Aisha’s concern is over policies that do not augur well for the masses.

“If indeed her actions are interpreted by some as criticism of her husband’s administration, then we must, as some have said, learn to see the difference between constructive and destructive criticism.

“When things are not going right, she raises an alarm and seeks solutions. A reoccurring public misconception is that she is a critic of the government. However, she drives opportunities to clarify the misconceptions.”

According to Sani, since the inception of her husband’s presidency, Aisha has been a target on social media.

“Whatever she says is given a different socio-cultural and political interpretations.Political antagonists then capitalize on it to discredit her for their political advantage.

“However this has not deterred the First Lady from speaking out on issues of public concern. Like a prophecy, most of what she speaks about comes to pass and in the course of time, she is vindicated. As the saying goes, the truth will always prevail,” she said