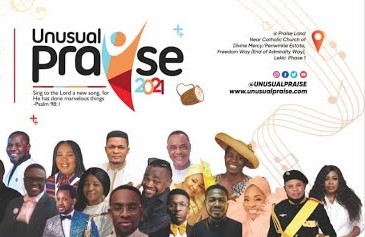 Nathaniel Bassey, Nkiru Emmanuel, Mr.& Mrs. Revelation, Big Bolaji, and others including the newly discovered gospel artistes drawn from various religious denominations, simply electrified and thrilled their audience at the 14th edition of the ‘Unusual Praise’, considered to be the largest annual Catholic Concert in Africa at The Tafawa Balewa Square (TBS) Lagos. and hosted by Catholic Church of Divine Mercy, Lekki.

Earlier before the concert themed ‘Let Everything that Has breathe praise the Lord’ kicked off at 5:00pm, the Chairman of ‘Unusual Praise 2022’ Chike Oruche said all should be prepared and allow God do his work as the heavens will open and his people will go home with abundant testimony. Many artistes who were in high disposition for the evening of wonders expressed readiness to lead the people of God to various praise and worship as they expect the out pour of the holy spirit. One of the artistes, Joe Vibes says he expects the mighty move of God’s power while Nkiru Emmanuel says ‘Everything thing that has breathe includes all and no discrimination. It is one evening, one stage and one God who we are giving all the glory.

Monsignor Paschal Nwaezeapu of the Catholic Church of Divine Mercy, Lekki, informed that the church has a mission called ‘Evangelization’ where people are fed with spiritual food, led to God and at the same time taken care of their personal and physical needs. This explains the reason why the ‘Unusual Entrepreneur’ which was set up in year 2010 for empowerment program became a tradition and part of the ‘Unusual Praise’ yearly. He also adds that during the Unusual Praise 2019, 251 people were empowered with start-up funds for small business schemes and regretted that year 2022 empowerment will not be as large as it is used to because of the economic crunch in the country. To this end, only 40 lucky people would be enabled in keeping with the tradition. As the event thrills all night, it will be closed with a morning mass as early as 5:00a, he said.