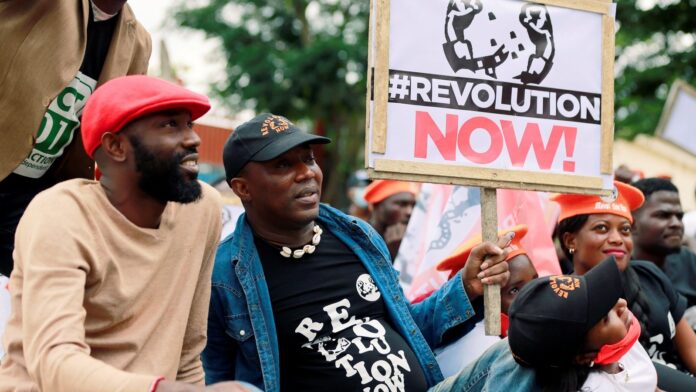 The Presidential candidate of the African Action Congress (AAC) in the 2019 Nigerian general elections, Omoyele Sowore has said restructuring is too late to solve the myriad of issues in the Nigerian polity.

In an exclusive interview with Njenje Media, and anchored by Maazi Ezeoke, the #RevolutionNow campaigner is of the opinion that breaking up from the oppressive chains holding Nigeria to ransom would suffice. He averred that the Nigerian configuration ain’t working because of bad leadership.

“The country doesn’t work. My position though is that the country isn’t working because of leadership. If you break up you will be in shock that a break up isn’t the solution. It rather should be the breaking up of the oppressive chains. I meet a lot of Igbos – businessmen, intellectuals. Go to the NBA, NFL, EPL, Universities, Hollywood, go to every part of the world you find them there. They have conquered the world.”

On restructuring, Sowore posited that the country has gone pass that particular stage.

“We are past restructuring. If I had my way I would have a revolution. I don’t hide it as you keep asking me the same question over and over again. It is just like you say to someone that you have a pot with dirty water and you don’t know how to break it. Why not rather get a pot with clean water?” He said.

When quizzed on the probable scenario of recycling not happening again, the Sahara Reporters founder opined that in revolution, what happens before doesn’t happen again.

“Revolutions don’t end overnight. Ask about how long it took for the French revolution to become permanent – ten years? We want to change overnight. When you do that you start bothering about how Nigeria can rebrand. They will create a new nation according to their own image. If Biafra is done by Kanu or Uwazurike, it will be done by whoever creates it.”

Sowore further agreed that the final solution is a referendum.