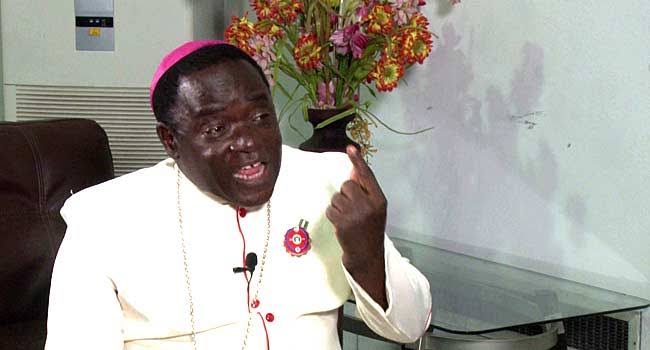 Fiery Preacher and Bishop of Sokoto Catholic Diocese, Rev. Mattew Kukah has posited that Nigeria as a nation hasn’t healed from the wounds of the Civil War.

The Bishop was speaking at the ‘Never Again Conference: 51 Years After The Nigerian-Biafran War’ a Virtual event organized by Nzuko Umunna, a pan-Igbo socio-cultural organization and anchored by Ovation International and Njenje Media.

Bishop Kukah said despite years after the end of the Civil war, there are different kinds of agitation that ordinarily commitment, dedication, focus mixed with the right leadership should have addressed.

At the Virtual conference hosted by veteran Media gurus, Chief Dele Momodu and Maazi Tochuckwu Ezeoke, the Outspoken Bishop bemoaned the approach to the agitations.

“I have met a lot of people who fought the war who are full of regrets. There is a lot of resentment, anxiety and frustration that we have not learnt any lessons.

“Fifty-one years after the war, we are still hearing the kind of agitations that ordinarily, with commitment, dedication, focus and the right leadership, we should have put a lot of the anxieties behind us. Unfortunately, they are still with us.”

While reminiscing on the Oputa Panel which he was privileged to be a part, the Bishop described the panel as the best school he hoped to attend.

He further affirmed that the coups and counter-coups were more or less smaller versions of civil wars themselves because they threw up the same contradictions, anxieties and divisiveness that characterized the Nigerian-Biafran War.

“Oputa panel managed to generate quite a lot of data and information that academicians and policymakers would have used to ensure we erect the signpost saying, ‘Never Again’, because it gave us an opportunity, a mirror to look at ourselves after hearing from all sides but we didn’t have the discipline to follow through.