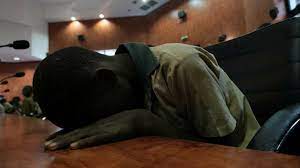 UK-based Popular Online Newspaper, Guardian has in its editorial column today the 6th of September 2021 analyzed the Nigerian situation and the failure of leadership, among other issues in the polity, Njenje Media News reports.

The piece enumerated the misnomers that have come to envelop the political and social firmament of the Nigerian state.

Read below courtesy of the Guardian.

In his treatise Leviathan, Thomas Hobbes did not suggest that government was benevolent – only necessary. Without it, argued the philosopher, people would live in perpetual fear in “a war of all against all” and life would be “solitary, poor, nasty, brutish and short”. His argument’s urgency reflected its context – the English civil war. But it recognized that the state had to be justified by a degree of consent from those it ruled.

The Nigerian government has a democratic mandate. Though President Muhammadu Buhari was once a dictator, his return to power in 2015 was the country’s first transition between democratically elected leaders. Voters chose him to tackle corruption and curb Boko Haram’s violence. But the state’s ability to carry out its most basic function, providing the basic physical security of which Hobbes wrote, is crumbling by the day. For too many Nigerians, the government is a force that encroaches on or plunders their lives without offering protection, let alone support. Unemployment is among the world’s worst, the cost of living is rising, the pandemic’s impact has deepened frustration and an oil price slump hurt the petro-dependent economy; all threaten to worsen widespread violence.

Nigeria has not one but multiple security crises. Mr. Buhari boasted that it had “technically” defeated Boko Haram. But six years on, jihadist violence continues in the northeast, and Islamic State West African Province appears to be establishing quasi-governance in places, collecting taxes, and digging wells. Things are worse in the northwest, where hundreds of schoolchildren have been kidnapped for ransom, including 73 in the last week. The banditry grew from longstanding conflict between herders and farmers, often from different ethnic groups. Armed vigilante organizations formed in response now pose a threat themselves and jihadist groups are an increasing presence. Police are reluctant to keep people safe, or incapable of doing so, in a region awash with arms, where one gang recently shot down a military jet.

The Delta Avengers, quieter in recent years, has threatened to resume attacks on oil installations there. In central Nigeria, there is growing banditry and inter-ethnic violence. Armed attacks have grown in the south-east since security forces clamped down on protests in 2015 calling for Biafran independence.

This government is far from the sole cause of these woes. Many are rooted elsewhere, including in the legacy of past administrations, colonialism, and the foreign thirst for Nigeria’s resources. But the contrast between the state’s weakness in many realms, and its ruthlessness in others, is stark and unforgivable. Though security forces are frequently outnumbered and outgunned, the answer cannot be simply funnel them more resources. Repression and human rights abuses have in many cases radicalized populations.

The 2020 “end Sars” campaign against police abuses was bloodily suppressed and the crackdown on civil society continues. The government banned the use of Twitter, proposed new laws to rein in journalists, and told broadcasters to limit the reporting of the rising insecurity. Many fear electoral conditions have deteriorated.

Nigeria is not a failed state. But governance failures mean that support for the whole political class is eroding fast. Many in this youthful nation can see what the country could be with better leadership. Some industries, like the tech sector, are thriving. “End Sars” showed the young’s capacity to mobilize, as well as their passion and determination to make their country better. The tragedy is that these signs of hope come in spite of their leaders.

Lady Seeks Justice As BSUTH Cuts Off Her Breast Thinking She...