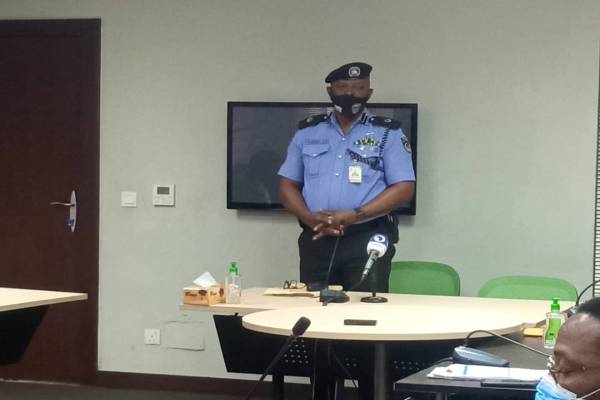 The Head of Operations at the Nigeria Police Force, Lagos Command, ACP Oludotun Odubona has told the panel investigating the Lekki tollgate shooting of last October and Sars-related abuses that no police officer was at the scene of the alleged shooting of protesters on October 20, 2020, Njenje Media News reports.

He added that the Lagos State Commissioner of Police, Hakeem Odumosu had since October 14, ordered the withdrawal of officers from the tollgate, because, ‘a mob had taken over the protests.”

The witness was speaking on Tuesday, representing Mr Odumosu, at the continuation of the evidence by the Lagos Command on the role played by the police during the #EndSARS protests in October last year.

He gave more evidence on how there was a breach of police armouries in different police divisions in the state, he did not disclose the total number of police rifles and ammunition that were carted away by hoodlums.

The ACP said a particular hoodlum carted away a box of ammunition that had a twin container and each contained 1500 rounds of live ammunition.

During cross examination by counsel by the Lagos State government, Abiodun Owonikoko, also denied claims that police officers used live ammunition on anyone at the tollgate that night. He said officers only used tear smoke to repell an attack by thugs at Ilasan Police Station.

According to him, when there is an event for the police to shoot, they do so “to maim and not to kill. The highest level of gladiated force is to make use of live ammunition and that cannot be done unless there is superior directive.
Even when such directives are given, the police don’t shoot to kill, they shoot to maim,”

Among the video clips he presented from two flash drives now admitted by the panel, was a clip of a young man brandishing a scorpion gun at the toll gate, but ACP Odubona said he couldn’t ascertain whether that act was before the shooting even though there was a crowd around at the time.

He affirmed that some arms and ammunition looted from Police structures during the period are yet to be recovered.

The witness also fielded questions from counsel for the Lekki Concession Company, Rotimi Seriki who asked if there was any report by members of the public of the shooting at the tollgate, to which he denied.

ACP Odubona said no complaint was made against the LCC, or the DPO of Maroko police station, which has jurisdiction over the tollgate. He added that there was also no report by any health facility of treating anyone for gunshot wounds.

A protester, Sarah Ibrahim had claimed before the panel earlier that the DPO, CSP Raji led some officers who were dressed in white robes, shooting at unarmed civilians that night.

The witness also said the police recorded many reports of cult clashes between Lekki and Ajah that time which were heightened after the disbanding of tactical units on October 11.

The panel adjourned to Friday, September 17th for counsel for some groups of protesters and the Nigerian Bar Association to cross examine the witness.

‘A President Who Loves His Country Would Not Travel Abroad For...