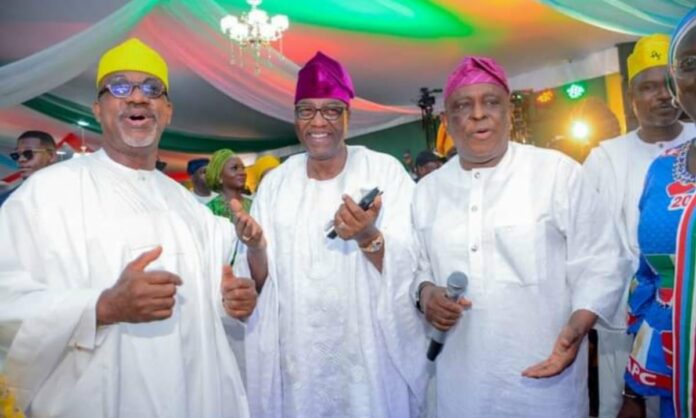 Ahead of the 2023 general elections, the All Progressives Congress (APC) in Ogun State on Saturday inaugurated its campaign council.

In the list sent to our sources, former Governor Segun Osoba was named the Grand Patron, while Governor Dapo Abiodun is the Chairman.

Ex-Governor Gbenga Daniel, who is also the Ogun East senatorial candidate of the APC, is the Deputy Director General (Ogun East).

However, the immediate past Governor of the State, Ibikunle Amosun, is not on the committee.

Amosun, who is a presidential aspirant of the APC and incumbent Senator representing Ogun Central, is a member of the Bola Tinubu Presidential Campaign Committee.

Our sources gathered that the non-inclusion of Amosun in the Ogun APC campaign council has to do with his refusal to support the second-term ambition of Abiodun.

Amosun had insisted that he would not work for Abiodun’s re-election, saying “he must be removed.”

The Senator had vowed to mobilise votes for Barr. Biyi Otegbeye of the African Democratic Congress (ADC).

Daring the APC leaders to do whatever they want as a sanction for his seeming anti-party activities, Amosun said he would go all out to campaign for Otegbeye, even though he would do the same for Tinubu.

Meanwhile, our correspondent reports that an Abeokuta Federal High Court had, in two separate cases, ordered the Independent National Electoral Commission (INEC) to expunge Otegbeye’s name from the list of candidates, saying the ADC did not follow the Electoral Act in the conduct of its primary elections.