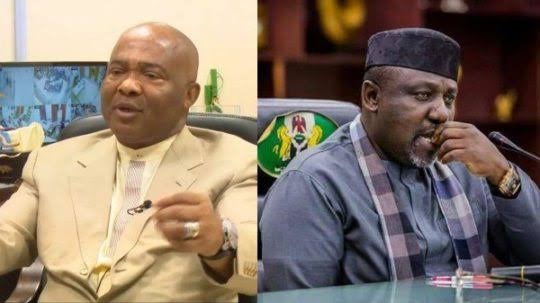 Imo State Governor, Hope Uzodimma has declared that he has no personal grudge to settle with a predecessor, Senator Rochas Okorocha, but insisted that all looted properties will be recovered, Njenje Media News reports.

The Governor made the assertion while addressing Imo people at the fourth Stakeholders meeting which he tagged a special edition.

Baring his mind on last Sunday exchange between Okorocha and the Police at the Royal Spring Palm hotels and apartments, Uzodimma  while condemning the action of the Imo West Senator but likened his days as governor as the dark years in Imo State.

“Okorocha imported thugs to invade the state. The commissions of inquiry were set up by Chief Emeka Ihedioha to investigate the affairs from 2011 to 2019 which was in response to the yearnings of our people. There was no due process in governance, contracts awarded without due process, lands forcefully collected and our master plan which was jealously preserved was recklessly abused”.

RELATED POSTS:  THE IMPERATIVE OF NORTH/SOUTH ROTATION; ADVICE TO ALL THE POLITICAL PARTIES