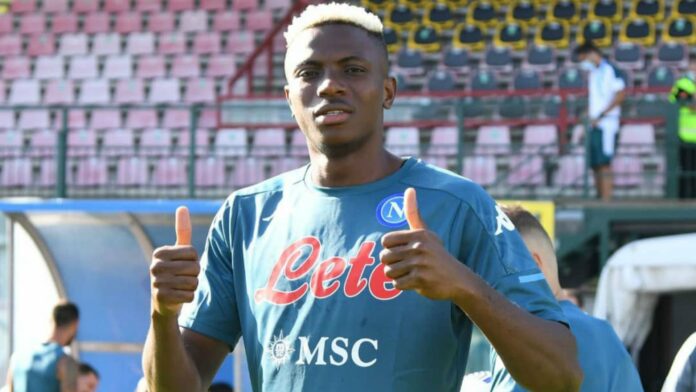 Super Eagles striker, Victor Osimhen has revealed that Luciano Spalletti’s constant probing and stimulation has helped him improve at Napoli.

Osimhen arrived at Napoli in 2020, and he slotted right in as the point man under former boss, Gennaro Gattuso. However, he struggled to make a mark majorly due to injuries.

Nonetheless, Gattuso left the club at the end of the season, and Spalletti, who had previous stints at AS Roma, Inter Milan, and Udinese got the job at Napoli.

Since Spalletti took over the reins at Naples, Osimhen has become a different animal. The Super Eagles star has quickly risen to become the most prominent player at Napoli.

Last season, the 23-year-old Nigerian striker hit 18 goals in 32 games. This season, Osimhen has been hotter, hitting ten goals in a functional Napoli side.

The Nigeria international believes Spalletti’s influence is the major reason for his impressive performances.

“My growth is linked to Spalletti,” Osimhen said as per Napoli Magazine.

“He believes in me. He gives me stimuli, makes me work hard, and never lets me stop. “With him, everything is easier because you understand that it’s a job that makes you do it to improve even more. It’s just the beginning for me, I haven’t reached any milestones yet.”

The post Osimhen: Spalletti has made me a better player appeared first on The Sun Nigeria.