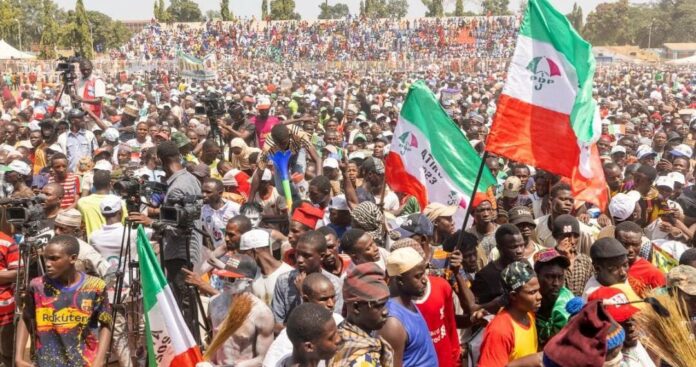 As the Peoples Democratic Party (PDP) campaign train arrives in Osun State, residents of Osogbo have lamented the untold traffic hardship it has imposed on them, Njenje Media News reports.

The PDP presidential rally is holding on Wednesday, December 7, 2022, at the Nelson Mandela Freedom Park, Osogbo.

Most routes in the town have been blocked as both commercial cars and motorcyclists as well as private vehicles have been forced to take alternative routes.

Residents have also complained of the traffic congestion as most of them were not aware of the presidential rally that has been scheduled for today in Osogbo.

While complaining that most of the routes in and out of Osogbo have been blocked by security personnel, Adebowale Damilare, a commercial motorcyclist told DAILY POST that he and others who are into the business have been compelled to increase their fares due to the importance of their mode of transportation.

He added that the fares were already hiked because of the fuel scarcity in the state but that the traffic congestion caused by the PDP presidential rally has now tripled the price hike.

“We have to start accessing other routes and going into streets to get our passengers to their destinations. Normally, we would have accessed the main road but now we are deploying our knowledge of the shortcuts to satisfy our passengers.”

“I was coming from Oke-Onitea this morning and the driver of the Korope (minibus) conveying me to work at Dada Estate had to negotiate until we got to Awosuru and then out to Iwo Road.

RELATED POSTS:  2023: Only Tinubu And Yahaya Bello Are Threats To PDP -- PDP Chieftain

“The distance to me was like an Israelite journey because we spent more than an hour on the road for a mere 10 minutes ride.”

Most transporters travelling to Ilorin and Offa accessed the outer ring road, avoiding the town totally so as not to get caught in the traffic congestion.

Jamiu Mohammed, a civil servant disclosed that coming from the outskirt of Osogbo had been hectic for him on a normal day and the traffic congestion occasioned by the PDP presidential rally had made the day a nightmare for him and members of the family.

“I don’t own a car and on normal days coming to Osogbo from where I reside is somehow hard but today, I regret stepping out of my house.

“As a civil servant I have a job to go to if not, today would have been a good day to go to my farm and do some work there.”

Others lamented that there was no difference between the All Progressives Congress (APC) administration which was in the saddle and now that the PDP is in control of the state, there has been no remarkable change.

“The APC will block all the roads and now the PDP has picked up from where they left off. One vicious cycle still obtainable.”