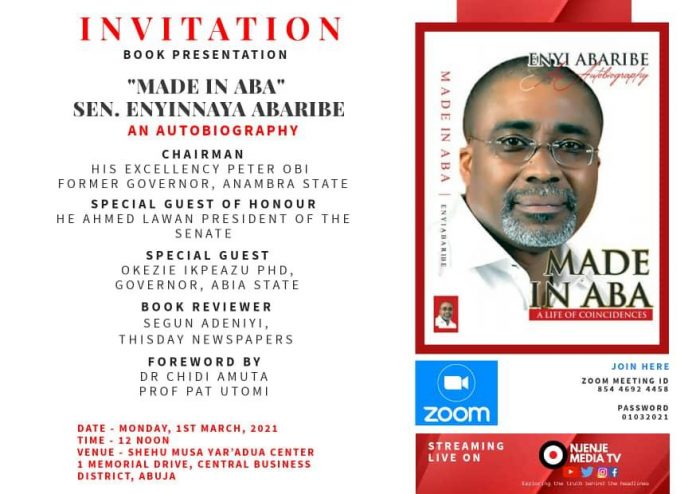 The book which is titled ” Made In Aba, A Life Of Coincidences” is scheduled to be launched at Shehu Musa Ya’Adua center in Abuja, and will be moderated by Maazi Tochukwu Ezeoke (Njenje Media)

Abaribe who was elected as the Deputy Governor of Abia state in 1999, in his Autobiography “Made in Aba”, talked about how a man of normal background whose sense of purpose has propelled through a brilliant career first as a young apprentice intellectual and later a company executive and adventurous businessman”.

Abaribe who was elected to the national Senate in 2007 on a People’s Democratic Party (PDP) ticket became the Senate’s Minority Leader in 2019 narrated his experiences in Nigeria’s politics.

The Special guest of honour at the event is the Governor of Abia state, Okezie Ikpeazu and the book reviewer will be Chairman of Thisday Editorial Board, Segun Adeniyi.

The event will be streamed live on Njenje Media TV and across all their social media handles.