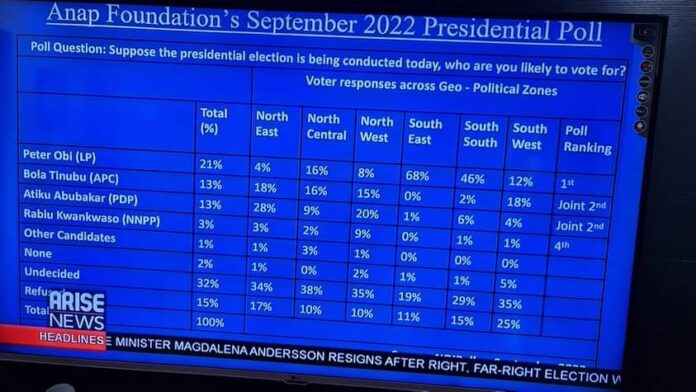 Ahead of the forthcoming 2023 Presidential elections, a recent nationwide opinion poll commissioned by Anap Foundation and conducted by NOI Polls Limited was concluded in early September 2022. The Poll revealed a substantially close race between Mr. Peter Obi of Labour Party (LP), Asiwaju Bola Ahmed Tinubu of the All Progressives Congress (APC) and Alhaji Atiku Abubakar of the People’s Democratic Party (PDP).

Running significantly behind the leading pack is Dr. Rabiu Kwankwaso of the New Nigeria Peoples Party (NNPP) who is the lone outsider i.e. a “dark horse” in the race. All other contestants polled results that are statistically insignificant.

Undecided voters and those who prefer not to reveal their preferred candidate add up to a whopping 32% and 15% respectively. The gender split of undecided voters shows that 39% of women are undecided versus 27% of male voters.
Poll Question: Suppose the presidential election is being conducted today, who are you likely to vote for?
Total (%)
Voter responses across Geo – Political Zones
North North North South South South East Central West East South West
Poll Ranking

46% of the respondents would love to see their preferred Presidential candidates participate in a televised interview and/or debate, with the interview/debates spanning across topics like their party manifestos, issues of Security, Economy, Education, Job Creation, Healthcare and Agriculture amongst others.
It is worthy of note that 69% of those aged 18-25, 76% of those aged 26-35, 77% of those aged 36-45, 87% of those aged 46-60 and 89% of those aged 61+ responded saying that they would definitely vote in the coming elections. The age groups that expressed the greatest willingness to vote were those between 46-60 and 61+ years. On average, the Poll shows that almost 8 in 10 registered voters are absolutely certain that they would be voting in the next presidential election. If they stay committed then we could witness a huge turnout in the February 2023 elections. Furthermore, Mr. Peter Obi led the pack in virtually all the age categories i.e. his leadership was not confined to the youths only.
While these Poll results show some significant trends, it is key to note that the battle ahead lies in the hands of the undecided/swing voters, as it appears they would ultimately decide which candidate takes the lead to emerge as the President of the Federal Republic of Nigeria in the 2023 presidential elections.
In summary, our September 2022 Polls are inconclusive in terms of establishing a clear winner, as the undecided voters are large enough to turn the tables. However, Anap Foundation has concluded that the trends are clear enough to establish the front runners and so our subsequent polls will concentrate on the 4 leading candidates only.

RELATED POSTS:  Carpenter Who Accused FFK Of Rights Abuse Arrested By The Police