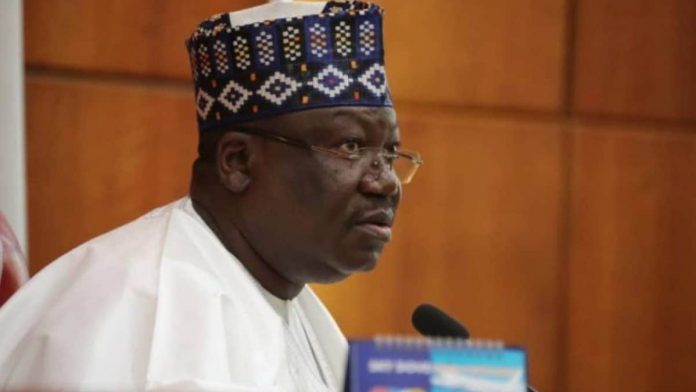 Senate President, Dr Ahmad Lawan on Monday revealed that he had lobbied the Kaduna State governor, Malam Nasir el-Rufai to prevail on his colleagues to encourage their respective state houses of assembly to transmit back to the National Assembly their responses on the bills sent to them on the Constitution amendment.

The National Assembly in March 2022 passed 44 bills to amend some key provisions of the 1999 Constitution and transmitted them to the 36 states for their endorsement or otherwise as part of the constitutional amendment process.

The process requires the endorsement of not less than two-thirds of the 36 state houses of assembly for any of the bills to sail through but far less than half of the 36 states were believed to have so far transmitted their responses back to the National Assembly.

The Senate President spoke against this backdrop while declaring open the Distinguished Parliamentarians Lecture 2022 which was organised by the National Institute of Legislative and Democratic Studies(NILDS).

The lecture was delivered by the Speaker of the House of Representatives, Rt. Hon. Femi Gbajabiamila.

Lawan told Governor El-Rufai who chaired the occasion: “We will task you to lobby for us. We have sent (to the states) the outcome of our constitution review and we are yet to receive all from the states.

“So we should be able to wind up this process by getting responses from the state houses of assembly. Even if it is one month left, we have the capacity, working together, to ensure that we pass some of the legislations that are required in a very expeditious manner. Lobby your governor colleagues because I can see that you do that very well.”

RELATED POSTS:  I Have No Plans To Dump PDP For APC – Shaibu

Lawan said the lecture was one of the laudable initiatives of NILDS geared towards bridging the gap between the electorates and their elected representatives.

He said: “It is also an avenue for us, the parliament to tell our stories to the wider audience, so as to change the misperception and misinformation in the public domain.

“No doubt, the legislature which is the fulcrum of democracy worldwide has been misunderstood, some for mischievous purposes and at times owing to its underdeveloped stature historically.

“It is in lieu of this that the First Parliamentarians lecture which I delivered last year gave a lucid narration of such misplaced perception of the 9th Assembly under my leadership.

“The House of Representatives is that vigilant younger brother who ensures that its swaggering elder brother, the Senate, stays on course.

“Tellingly, the 9th National Assembly (including the 9th House of Representatives) has passed some of the most ground-breaking and significant legislations in the history of parliamentarianism in Sub-Sahara Africa.

“To mention but a few, the Companies and Allied Matters Act, which was passed in 2020, has revolutionized Nigeria’s corporate world and fostered the ease-of-doing-business agenda of the federal government of Nigeria.

“The Petroleum Industry Act, which was passed in 2021, is a watershed enactment that clearly stipulates new principles, new regulatory regimes, and new governance frameworks for the realization of the full promise of Nigeria’s hydrocarbon potential.”