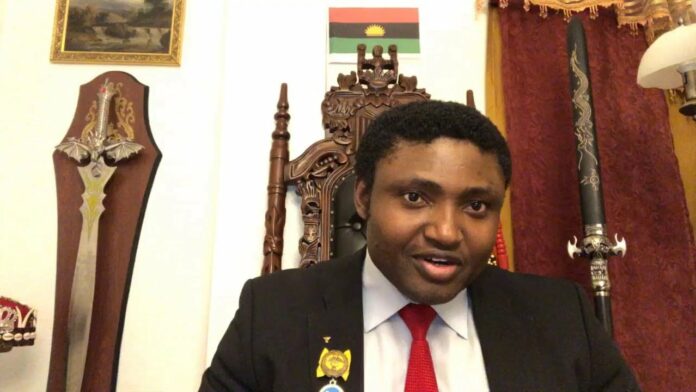 Igbo apex socio-political organization, Ohanaeze Ndigbo, on Monday called for the arrest of a self-acclaimed disciple of Nnamdi Kanu, leader of the Indigenous People of Biafra, IPOB, Simon Ekpa, over the killings and destruction in the Southeast.

Okechukwu Isiguzoro, the Secretary-General of Ohanaeze, said Ekpa should be arrested and repatriated to Nigeria for prosecution over the violence in the Southeast.

Isiguzoro identified Ekpa as one of those instigating the killings and destructions in the Southeast.

Recall that the Finland-based Ekpa recently declared a five-day sit-at-home across the Southeast.

IPOB, however, distanced itself from the order by Ekpa while urging residents of the region to go about their activities.

However, Isiguzoro said Ohanaeze would liaise with the Finish Embassy and relevant authorities to ensure that Ekpa is arrested and repatriated to Nigeria to face the consequences of his actions.

A statement by Isiguzoro reads: “Ohanaeze Ndigbo Worldwide has commenced the processes of making sure that those responsible for the pandemonium, destruction of public properties, killings, and civil unrest in the southeast will face the consequences of their actions, the incitement of chaos, and their contributions towards the insecurity challenges in the Southeast.

“Ndigbo has identified Simon Ekpa as the overseas provocateur and instigator for the current killings in Imo state, the destruction of public properties in Enugu State, and disturbance of public peace and sporadic shootings in Ebonyi State.”

The statement further avowed: “Ndigbo will liaise with relevant organizations, Finish Embassy in Nigeria, and Nigerians in Diaspora to seek ways to bring Simon Ekpa back to Nigeria to face prosecution and trials over the killings of south easterners, burning of public properties and the disturbances of public peace.”

Isiguzoro accused Ekpa of issuing evil decrees against the collection of Permanent Voters Cards, PVCs, in the Southeast.

He described Ekpa as a criminal hiding under the Finish citizenship and Biafra agitation to wreak havoc and extort monies from Nigerians abroad.

According to him: “The so-called self-acclaimed Biafran agitator is championing the disruption of election processes in the southeast, with evil decrees against the collection of PVCs in the southeast, and institute an illegal but violent Sit at homes, to undermine the economy of Ndigbo in this festive seasons and stimulate violence, massacres, and chaos as Christmas gifts for Ndigbo.

“Ndigbo calls for the immediate arrest, and repatriation of Simon Ekpa, to Nigeria, he’s a trickery man and criminal hiding behind Finish citizenship and Biafra agitation to wreak havoc, extort monies from Nigerians abroad, and influence the insecurity challenges against Ndigbo.”

He added: “This is the height of deception and treachery against Ndigbo, and the immediate arrest of Simon Ekpa will end up insecurity challenges in the east and serve as a deterrent to others, who might want to consider being a menace to the public, particularly to the people of the southeast.”