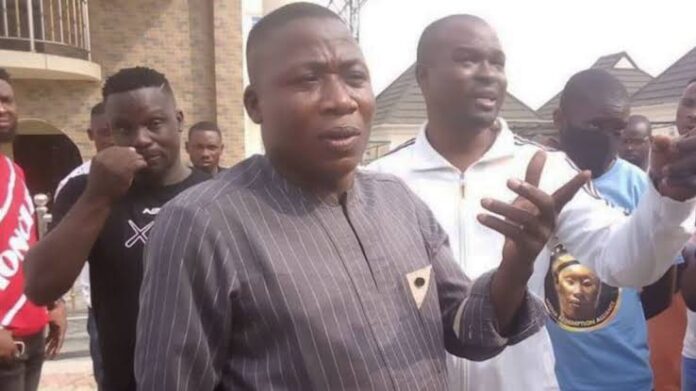 According to reports, in the early hours of Monday, gunshots were heard in front Igboho’s house, a situation that has put residents in the area in panic.

Spokesperson to Igboho, Dapo Salami told BBC Yoruba, that the gunmen surrounded the building at midnight and started shooting.

Also, in a video recording by another Igboho’s spokesman, Olayomi Koiki, he claimed soldiers of the Nigeria Army were responsible for the siege on Igboho’s house with a probable attempt to arrest the activist.

While drawing the attention of the international community to the development, Koiki, who described the situation as a huge challenge, called on all Yoruba sons and daughters to rise in solidarity and fight for their ‘freedom’.

“We are more than capable to secure ourselves, we have chased them far from here, I am sure you can hear gunshots. That is them shooting from afar, we cannot be intimidated because we are fully prepared and ready for them,” Koiki stated.

On who could be responsible for the alleged attack, Koiki who fingered the Federal Government explained that Governor Seyi Makinde-led Oyo State government could also have a hand in it.

“By tomorrow morning (Monday), I am sure the government would come with false press statements, that it was a set of unknown soldiers. That was the same tactic they used to attack Fela’s mother. They equally used it during #EndSARS.

“They brought us a letter sometimes ago but we rejected it because it was a letter they used to kill Dele Giwa. We have chosen to be peaceful only for them to keep looking for our trouble, which we won’t hesitate to give back to them” Koiki added.