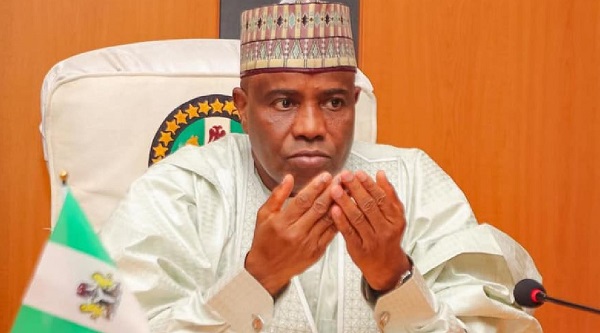 His smiles are infectious. He appears as a man who cannot hurt a fly. He is a likeable personality. Charismatic, witty, discerning,  foresighted, and calculating.  Aminu Waziri Tambuwal, lawyer and governor of Sokoto State, has become a master of deft political move and symbol of regional trick.

He became the cynosure of all eyes at the  last weekend  presidential primary of the Peoples Democratic Party (PDP) in Abuja after stepping down for former Vice President Atiku Abubakar.

The Sokoto governor was said to have been asked to step down by powerful Northern leaders working assiduously for power retention in the region for 16 years. Mounting pressure on him to step down fell within the framework of resistance to zoning or power shift from the North to the South in post-Buhari period.

But, other aspirants were taken aback when, in a dramatic manner, Tambuwal begun a fresh and last minute campaign for the Waziri Adamawa when he suddenly resurfaced on the podium after the initial five minutes alloted to each aspirant to address the delegates.

Brimming with smiles, he urged his supporters to vote for Atiku, thereby giving him an undue advantage.

Those who had stepped down, either hours before the commencement of the primary or shortly before voting kicked off, never campaigned or urged their supporters to vote for any contender.

To observers, fairness and a level playing ground for aspirants may have been set aside when a parti cular aspirant appeared to have been accorded a preferential treatment.

Was the procedure for the primary not breached when the PDP Presidential Primary Planning Committee allowed Tambuwal to return to the podium?

Some Generals in blissful retirement, as it was said, lent their experience on coup plot to party leaders.

Was it not reminiscent of the 1978 World Cup, which Argentina won against Peru? Argentina needed 4-0 to proceed to the final. But, it defeated Peru 6-0. The military authorities ensured that Peruvian goal keeper conceded goals.

For stepping down for Atiku at the convention, which thereafter paled into a predetermined exercise, the national chairman of the opposition party, Dr. Iyorchia Ayu, proclaimed the Sokoto governor as the hero of the primary. The remark of the party leader was divisive. It also looked like a mockery of sorts.

The role played by Tambuwal was consistent with his antecedent. Some critics have described him as a survivalist. It may be debatable. The PDP  once chided him for being slippery, after he went against the position of the party on zoning of the Speaker of House of Representatives to the Southwest. Then, the party had in mind a committed stalwart, Mrs. Mulikat Adeola, from Oyo State.

Tambuwal had run to opposition leaders in the Southwest for support. He eulogised them for the support. To become governor, he defected from the PDP, fulfilled his dream and later, retraced his steps, to the consternation of those who assisted him.

Much more later, he repudiated the critical support, saying that those making references to it lack access to information.

When he returned from All Progressives Congress (APC) to the PDP, he appeared to have sealed a pact with Rivers State Governor Nyesom Wike, who worked tirelessly for him at the 2019 presidential primary.

But, Wike was more dazed at the weekend. Although he had teamed up with Tambuwal four years ago, the gesture was not returned. There arose a conflict between commitment to political friendship and devotion to a regional agenda. There was no alliance of interests. Mutual confidence was ruptured.

Although Ayu said Tambuwal was the hero, Atiku, an experienced politician, quickly ran to Wike to pacify him. It was even reported that the running mate slot was being dangled at him.

To analysts, Tambuwal, who knew he could not win at the primary, tactically embraced the soft landing. Using a stone to kill two birds, he also fulfilled the wish of his bloc region.

Tambuwal is likely to contest for Senate. It is being said that he may be offered the position of Senate President, if PDP wins.

But, according to observers, a deft political move applauded by its beneficiaries today may become a cross to carry in the future.

Politics is in the air. This is an interesting time.