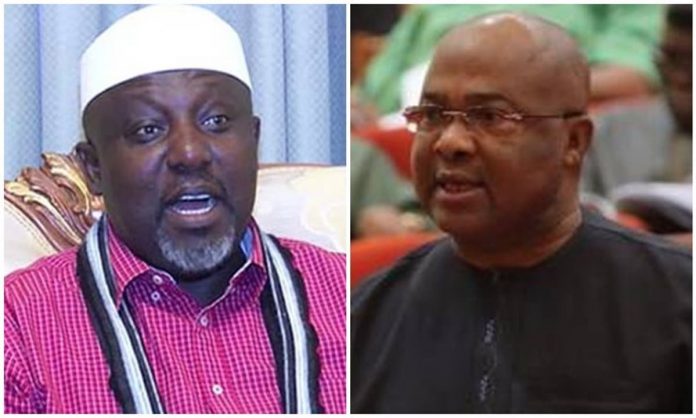 While addressing his followers, Okorocha  said anyone who came in through the legal route should obey the rule of law and further cautioned Uzodinma not to take his calmness and peaceful disposition for granted.

“Governor Hope Uzodinma is moving in a wrong direction that he may not end up well with. With what happened yesterday, Hope simply displayed criminality in governance, thuggery in governance. He is creating unnecessary tension, when there is no need for it. Imo today is very unsecure for the first time since nine years. Now when you go to Orlu, you see killings that even the air force jet, for the first time in the history after the war came to Orlu. You see, yesterday alone, 10 houses were burnt, at Ukwuta. Everyday people are being killed in this state, people are being intimidated by the governor and his thugs.

“Now I do not know what the governor wants to achieve, but I think he wants to make everybody to fear him. He has also introduced a law through the Imo state House of Assembly that empowers him to detain people at his will. That law is barbaric and must be condemned. Now Governor Hope Uzodinma is busy chasing shadows of violence, and leaving performance. Since he came to office, what he has achieved so far is demolition of one thousand bed hospital in Douglas Somto, built by me.

“He has demolished the Tunnel at Port-Harcourt road, built by me, on the reason that it was sub-standard. He has demolished all the roundabouts that have brought beauty and safety of roads in our society, without replacing them. Rather than making peace, he wants to rule by intimidation, and that is not acceptable in anyway. A wise governor who has not paid his workers, who has not paid teachers, pensioners, sacking workers, sacking teachers at will.

RELATED POSTS:  PDP Chairman-Elect Advises Youths Not To Wait To Be Given Power

“Pay some and leave some. Now the wisest thing to do if he does not have money, is to use good speeches to appease the people. But unfortunately the governor is inciting violence on daily basis.

“Now he has taken a personal attack on me and my family, and I have not done anything in retaliation. First the governor reported the matter to the Economic and Financial Crimes Commission, EFCC, the Independent Corrupt Practices Commission (ICPC), claiming that I used Imo state money to build some properties.

“The case has been in court, and till date there has not been any proof, by any court of competent jurisdiction, that has traced any government funds to any of my accounts. Yet Hope has insisted in reporting the case every little to ICPC and CPC. When he saw that he is not making headway at the EFCC, he turned back to use the police. But I must say today, that the act of the government house police yesterday should be brought to question. I want to ask, that the Inspector General of Police, IGP, Mohammed Adamu, direct the arrest of Chinasa Nwaneri and Eric Uwakwe, who led the thugs. Most of them have been in armed robbery activities in the state.

“I want the Inspector General to investigate, if those are policemen or thugs brought outside wearing Police uniform. I don’t think that any sane policeman will act in a manner those officers acted yesterday. There is a breakdown of law and order in the state. I don’t think that any sane governor will want to govern a state of violence. Concerning the hotel in question, Hope Uzodinma, Commissioner for Land went to that hotel which I requested my wife to come down home and invest  for the purpose of creating jobs and helping our people”.

“I was never a poor man before I became governor of Imo state. I came here, brought my children to invest, I brought everybody to invest because I believe in this state. Most of these people who are fighting me do not have one single investment. The commissioner for Land went there and arrested all the people, including guests of the hostel, before putting the pad lock he claimed he put. Why not put the pad lock first, then if anybody goes there, then you can arrest the person”.

“But he arrested these people and brought them to the police station. They are still there and the Police, also have the audacity to detain innocent citizens because the governor has directed them to do so. The amount of shooting that took place in that hotel was more than two hundred gunshots. Who are you shooting? Who do you want to kill? That is my question. Do you want to kill the citizens you are governing? That again is my question. So Hope Uzodinma must be called to order. His thugs were shooting at us while Police officers from government house were watching”.

“I restrained my aides not to shoot because I hate to stain my hands with blood, if not there would have been lots of deaths yesterday. They took advantage of that and did what they did to the extent that they destroyed all my cars, and riddled my cars with bullets. What Hope Uzodinma is doing is not good. Few days ago he went to Eastern Palm University and shut down the university were children are going to school.

“That is not the way to do it. A governor, who came through court, should know how to respect the rule of law.  If a matter is in court you cannot use executive power against the court power. But this is what Hope Uzodinma is doing in this state. But for the timely intervention of the presidency in this matter, Imo would have been something else by this time. I want to thank the presidency and those who intervened in this matter, because in a manner that Hope led by Chinansa.

“All of you know who Chinansa is in this state. We know his track records. I know he shares the same track records with Hope Uzodinma. We shall resist them, criminally governing this state. I have reported to all concerned. I have told everybody. And I have told them I am a man of peace. Hope Uzodinma should not take my calmness and peaceful disposition for granted. Enough is Enough.

“I governed Imo state for eight years, there was no record of me arresting anybody. I was the most abused governor. People abused me but I never in anyway, any day arrested a man. But today its on record that Hope Uzodinma arrested a widow, kept her for 22 days, saying that she did contract with Imo state and should explain where the money is. He arrested a house member and locked him up. He has been arresting people and intimidating them. Some of them do not have voice anymore.”