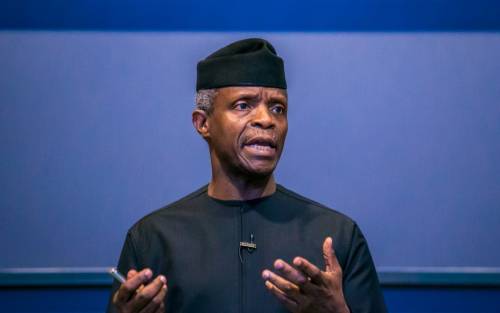 Vice President, Yemi Osinbajo, has said those wishing Nigeria well are more than those who have expectations of its breakup, Njenje Media News reports.

Pastor Osinbajo disclosed this on Tuesday, at the Palace of the Emir of Gombe Alhaji Shehu Abubakar, when he paid him a visit for the 27th edition of the Micro Small Medium Enterprise Clinic held in Gombe.

“This country will remain one. Those praying for Nigeria’s break up will not succeed because those praying against such are much in number.”

He commended the Muhammadu Yahaya administration for the transformation brought to the state in road construction, agriculture, and the health sector.

On his part, Governor Muhammadu Yahaya said the Vice President’s visit was a special one because when he visited the state during campaign days in 2019, so much has taken place that has transformed the state due to his administration.

In a report by Punch, he said, “Gombe State is the centre for commercial activities in the North-East, which is the reason why it has gained a cosmopolitan status. The state would give the Federal Government all the necessary support to fulfil their programmes.”

Responding, Emir of Gombe, Alhaji Shehu Abubakar, commended the vice president for encouraging and uplifting SMSE’s not only in Gombe State but throughout the entire states of the federation.

“I wish to commend the Federal Government for the establishment of one of the largest livestock reserves in Wawa-Zange, Gombe State,” Abubakar added.

IGP Tells Nigerians Not To Flaunt Their Wealth On Social Media