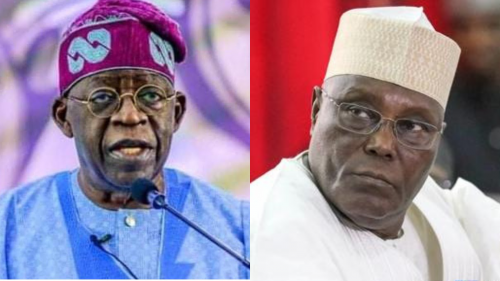 The Peoples Democratic Party, PDP, has picked holes in a recent comment by the presidential candidate of the All Progressives Congress, APC, Asiwaju Bola Tinubu.

In a video making the rounds on social media, Tinubu had while fielding questions from journalists on how he would tackle climate change if elected president, said “a question of how do you prevent a church rat from eating poisoned holy communion.”

“We are a poor nation. They say firewood is not for fetch. They say we need to plant more trees and they are not giving us money.

“We need to tell the West, if you don’t guarantee our finances and work with us to stop this, we are not going to comply with your climate change”, Tinubu said.

Concerned Nigerians have dragged the former Lagos governor on social media asking him to retract his comment on Holy Communion and apologize to Nigerian Christians.

Reacting, PDP, in a statement issued by the spokesperson of the party’s Presidential Campaign Management Committee, Dino Melaye, tacked Tinubu saying the comment depicted an insult on Christians.

Dino lamented that after ignoring the Christian faith and fielded Muslim-Muslim ticket, the APC presidential candidate has further “rubbed insult on injury by calling in the Holy Communion into an unrelated conversation”.

He said, “the APC presidential candidate, Ahmed Bola Tinubu, plunged into new depths of desecration when by an unguarded and unrelated flow of thought he despised the body of Christ by profaning the sacrament of communion and besmirched the church.

“Having overlooked Christians in his choice of a running mate, he further rubbed insult on injury by calling in the Holy Communion into an unrelated conversation”.

According to Dino, Asiwaju’s response to the question on climate change, exposed his ignorance of what climate change really means.

The statement reads, “Furthermore, he fell out of tune with world leaders in ways that betrayed a lack of understanding of what the Reverend Dr. Martin Luther King Jr called the “Fierce Urgency of Now”.

“It would have been honourable for Tinubu to simply admit that he didn’t know what climate change is. Again, that exposed his limited understanding and poor preparation for governance.

“Any leader of any great nation who does not understand the basics of climate change, especially with the ongoing flooding in Nigeria and the economic conflict arising from farmers and herders, has no business aspiring to lead our dear country at this moment.

“Besides, Nigerians who have been in doubt about the presence of mind and the physiological capacity of Tinubu to preside over the affairs of Nigeria should now be convinced that he is not fit.

“For a moment, his thought processes tripped and he launched into another issue entirely. Nigerians could imagine if what happened in Kaduna had happened on the world stage. As I said earlier, Nigerians can not afford to gamble with the next election.

“An Atiku presidency will not only be at home with global issues anywhere and anytime. He would build bridges and partnerships to address contemporary and emerging issues with pace, purpose and patience.

“He will collaborate with others to contain the causes and effects of climate change and more importantly, he will work for structures that will help Nigeria to build the resilience and adaptation to climate change, particularly in climate smart agriculture and other strategic initiatives”.