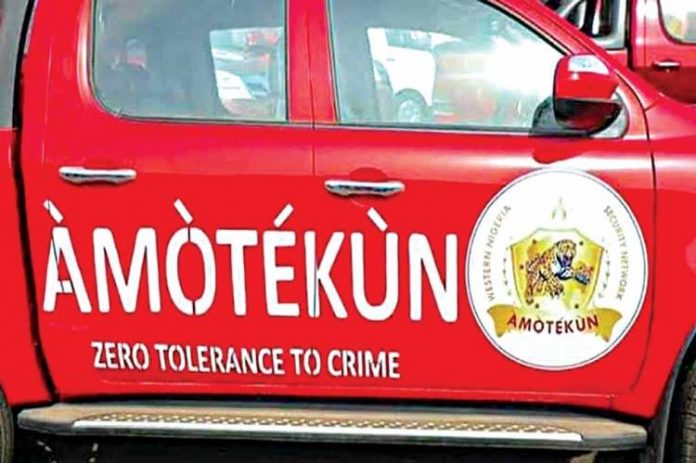 At least two people lost their lives on Wednesday, with the leader of the Amotekun Corps still missing after suspected Fulani herdsmen attacked men of the Amotekun corps at the Government Forest Reserve located at Ago Sanusi along Ute Road in Owo, Owo Local Government area of Ondo state, Njenje Media News reports.

TVC News reports that the herdsmen had laid ambush for the Amotekun men who after receiving a tip off from some farmers went to in the forest reserve on the trail of some criminal elements in the area.

The Amotekun corps had recently arrested 15 illegal miners who are of the Fulani stock allegedly involved in illegal mining in the area.

According to a source, the attack came at about 2:00 am on Wednesday.

The source said that the Fulani herdsmen who were heavily armed with sophisticated weapons like AK47 dressed like militiaman men, with live ammunition wrapped round their bodies .

It was learnt that a farmer whose name was given as Lanre and popularly called Lado had earlier been abducted by the attackers in the area and his corpse was later found with his right and left hands cut off.

It was gathered that a member of the Vigilante Group of Nigeria who joined the Amotekun in the operation was shot in the head by the herdsmen and died instantly.

The head of operations of Amotekun security outfit in Owo, identified as Oluwasesan Adebayo who was reported to be missing has not been found and his whereabouts unknown at the time of this report.