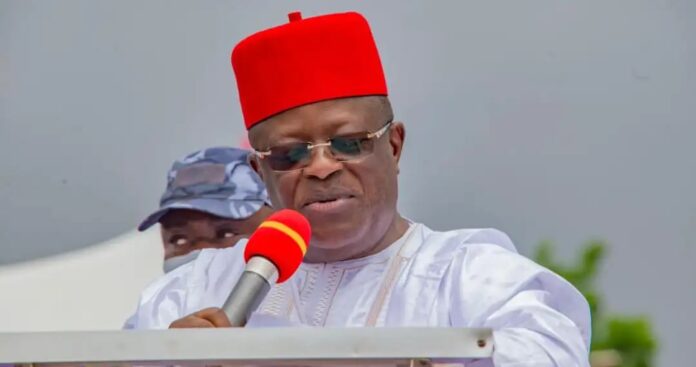 Attackers of the Ebonyi State Governor, David Umahi and Chairman of the South-East Governors’ Forum, are frustrated political loafers, who hitherto benefited from the governor’s magnanimity, the state government has claimed.

The state government was reacting to comments credited to some Ebonyi residents that Umahi allegedly plunged the state deeper into economic hardship and stagnation while pursuing his presidential ambition.

The Commissioner for Information in the state, Uchenna Orji, stated this in a statement, on Wednesday.

According to Orji, “Such utterances were the naked expressions of the bitterness of hearts of people who are at war with good conscience and who have been bewitched by their unmitigated sensational political extremism.”

He said, “Our attention has been drawn to the acrimonious utterances against the Governor of Ebonyi State, His Excellency, Chief David Umahi, by a group of politically frustrated loafers, namely: Godwin Udeakaji, Haroun Ajah, and Abia Onyike.

“We wish to state that the said utterances were the naked expressions of the bitterness of hearts of people who are at war with good conscience and who have been bewitched by their unmitigated sensational political extremism. It is even most ignominious that these negative utterances against the noble leadership hallmarks of our performing governor are the orchestrations of people who were once fans of Governor Umahi’s administration but fell out of grace for their undesirable and infamous personal idiosyncrasies.

“The lessons of the just-concluded presidential primary are clear; the governor was seen by Nigerians as the strongest voice for South-East presidency and the best presidential material of South-East extraction as can be seen from his gallantry during the primary elections. For the records, the Governor’s achievements were going to speak for him and not the state resources, as all the ongoing projects of the state government have been progressing geometrically even during the period of presidential campaigns and they are executed with the minutest resources and most transparent processes.

“We see the utterances of Godwin Udeakaji, Haroun Ajah, and Abia Onyike as acts of people who are dead in conscience, hardened in heart, blind to the facts, deaf to the truth, and saddened by the glowing attributes of Governor Umahi’s administration.”

Also speaking, Umahi’s Special Assistant on Strategy, Mr Chooks Okoh, said the Governor had earmarked over N1 billion to empower 3000 residents of the state, next week.

He added that Umahi remained the best gift that Ebonyi people had in recent times.

Describing the governor’s critics as perpetual ingrates and mischief makers, he said his boss had led the state better than those that came before him.

He said, “Clearly, it’s a very wrong statement to have been made by these residents. This is because the governor has instead empowered so many Ebonyians in a whole of lots of ways. There are a lot of young men who were given positions within and beyond Ebonyi State by the governor.

“The governor, has, unlike what these mischievous ingrates said, raised the standard of living of residents of the state. Almost all Ebonyi young men and women have been given grants worth N400,000 and N500,000 each.

“On our roads, you see young men and women with good cars. These are people who the governor has given opportunities to serve as either Coordinators or Management Committee members in various local government areas and development centres of the state.

“Last week, the governor approved the release of over N1 billion for the empowerment of over 3000 Ebonyians and the disbursement will soon commence. This is the first of its kind gesture coming the way of Ebonyi people from Umahi, in the history of the state.

“Are we talking about the Ebonyi International Airport, which is 85 per cent completed? Umahi is gradually achieving this state-of-the-art airport with the meagre allocation that accrues to the state on monthly basis. It’s only people whose lives are filled with an ingratitude that will open their mouths and not speak nicely of the governor.

“I travelled out of the state lately and I discovered that it’s only in Ebonyi State that you find passable roads. It’s not like that in other states of the country.

“Today, Ebonyi State parades and boasts of the best road network across the country. This is not an achievement by an ordinary mind. It’s an achievement by an uncommon mind and man with a heart of gold. Ebonyi people should be grateful to Umahi. It will take God again to give this state another gift like Umahi.”